I had the constant grouse about my New Year eve being never any different, spent at the same place year after year, though in the always so refreshing company of friends and families. Thankfully this one was different; as I welcomed 2010 in the majestic, erstwhile princely, place of Jodhpur, which falls in the state of Rajasthan. Rajasthan is a state I have come to love for all its rich history, majestic splendor and palatial opulence. 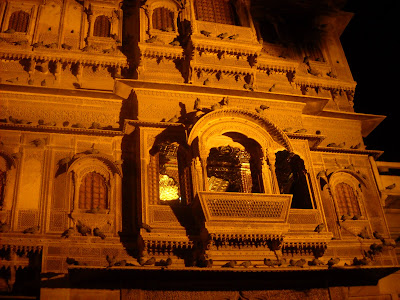 It was a seven day trip starting from beautiful Bikaner, followed by sandy Jaisalmer, and then the royal Jodhpur. Bikaner, the first stop on this tryst with royal Rajasthan, is in middle of the Thar Desert and has now a touch of modernity coexisting with the huge and magnificent forts and palaces along with ancient temples and traditions. The star attraction is the magnificent fort of Bikaner, or Junagarh fort as it is called. It is a huge man made marvel in the heart of the city built in 15th century by ‘Raja Rai’, one of the most able and trusted Generals of Mughal Emperor Akbar. 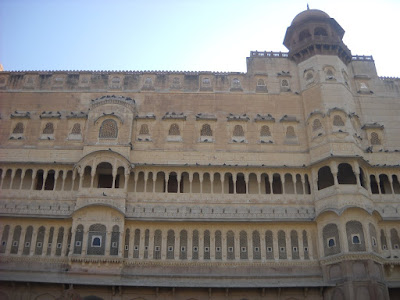 Rajasthan is truly a royal state having been ruled by the Rajputs, who were avid fort builders, and their fetish for architectural opulence still stands in most of the tourist places of Rajasthan. It has, with all the trappings of luxury and grandeur, an architectural similarity to the Amer fort in Jaipur, which I visited last year. 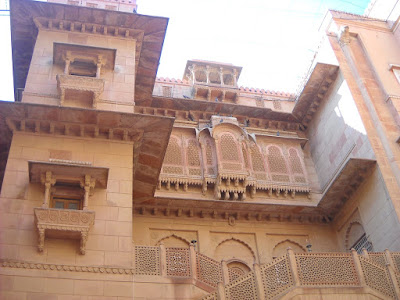 The overall beauty of the palace is astonishing but it was this mix of devotion and indulgence, the ‘Jhula’ or swing for the lord Krishna and his beloved Radha, that particularly caught my eye; it is a testimony to the richness and lavishness of the bygone times. 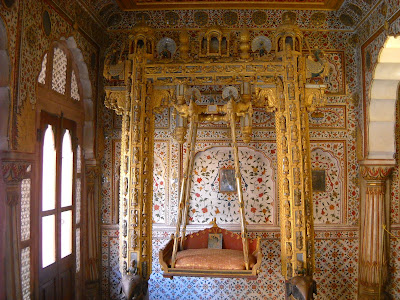 The bedroom left me gaping with awe. The elaborate carvings and embellishments, and the whole ambience cannot be measured in monetary terms; it is an invaluable creation. The walls were coated with pure Gold and precious jewels studded the designs and paintings. 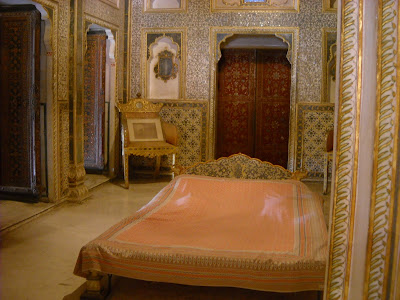 Another common aspect of the Rajasthan forts is the beautifully geometric gardens. The design style has been influenced by the Mughals, who left a great impact on Indian culture. 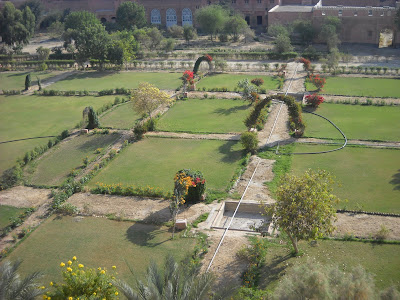 But Bikaner is much more than the fort and the palaces. It houses National Camel research centre, which has an incredible variety of Indian camels. 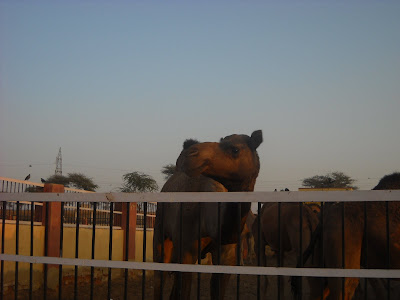 The innocent eyed ship of desert is a remarkable animal and the information on this board left me with tremendous respect for the unique adaptability of this animal to the desert environment (Click on the photo to enlarge and read the board). 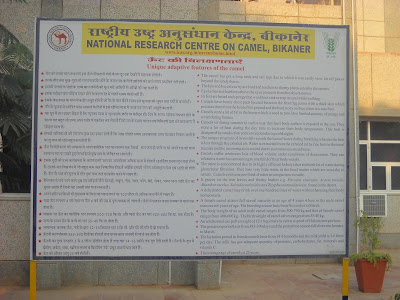 The handicrafts and hand woven Durries (rugs) are a specialty of Bikaner. 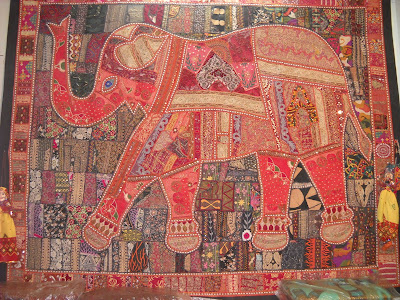 Hand weaving is becoming an endangered Art on account of the economic hardships which these exceptionally skilled but poor artisans have to face. Thanks to tourism the Government has woken up to the plight of these people and several steps are on to showcase their skills at an international platform. 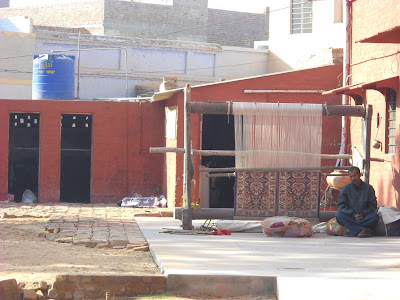 Nothing managed to hook my little one... 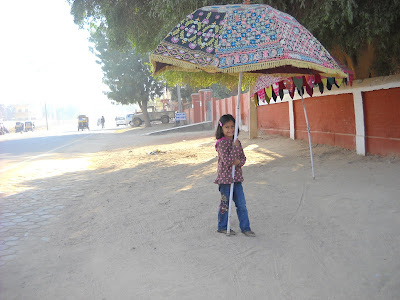 ...as much as this famous temple -‘the Karni Devi Mandir’, and not at all for its religious value, but for completely bizarre, unforeseen and, almost literally, biting reason. 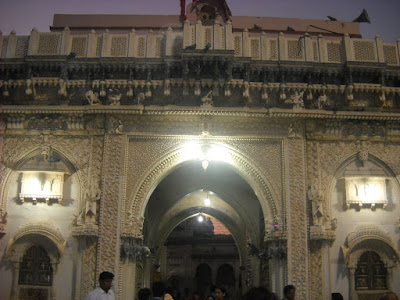 The temple, a much revered one, is home to scores…err no, hundreds…no, thousands of Rats…in fact around 20,000, as the guide told me! There are Rats everywhere. They run with gay abandon, unconcerned and unaffected by the thronging devotees. The rats have become the most attractive aspect of the temple…it does sound paradoxical though. The temple was built in the 15th century and it is said that local mystic, and demigoddess, ‘Karni Mata’ had forecasted that none of her family members will ever die and will continue to live on as rats in the premises of this temple. 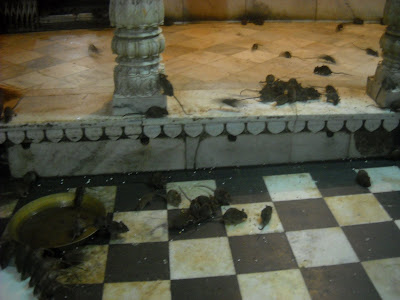 We all have customs, traditions, folklores; sometimes irrational, sometimes strange, and sometimes downright bizarre. But despite their lack of logic, they add richness to our life. They are a great bonding force. Just imagine a life totally ruled by logic – mathematical, insipid and robotic – and the need for some irrationality is immediately felt.
Posted by Green thumb at 6:46 AM

Lovely post, so full of information and interest. I had heard of the Kani devi temple, but hadn't believed it! Have a good day!

What I love most about India is that invading peoples never really changed much of anything in their own images in the end, they just became absorbed into a wonderful mosaic of cultures. Yeah, and the rats are cool too.

What a wonderful post...enjoyd reading and seeing all of these amazing places! Such unbelievable architecture! Rich and lavish...YES! They are just incredible!

Beautiful pictures! I visited Jaipur two years ago and absolutely loved it. Hopefully I will get the chance to see more of Rajasthan this coming summer...

I thoroughly enjoyed your post. EEEk Rats! Weren't you scared of the the rats? Don't they bite and crawl on people?

An amazing place! I think I'll skip the temple with all of the rats though. lol

Wow!! What opulence ... utterly stunning not at all ostentatious. Beautiful palace facades and bedroom. I love the loom and all the workmanship shown in this post is truly art! I might have a hard time adjusting to all the little family members but I would remain respectful.

Lotusleaf - thanks for the comment. Even I didn't believe, when I heard of the temple. Moreover I hate rats, so was genuinely apprehensive about the temple but the experience was good and the rats were rather cute!

Rainforest gardener - Thanks. That's quite true about India. It is a multilingual, multicultural society and the real meaning of the much used term can be appreciated only when we travel. Various invaders over the time added to this multicultural beauty.

Julie - thanks dear Julie for your lovely words. Its lavish, yes, and makes me yearn to go back in the history and see the proceedings first hand.

Islandgal - I was...and a lot! Strangely the rats were all very well behaved...or so I felt. To me rats have been a hideous species, but the ones in the temple were busy eating or playing with each other. They did crawl on the toes but, I was told, they have never bitten anyone.

Sweet bay - LOL...well, it is certainly up to you if you want to skip it but I won't advice that; it is a place worth visiting, and precisely because of the rats.

Carol - Thank you so much. Your two lines have described the place more beautifully than my whole post.

Lovely site. Would you be able to identify some trees/plants for me?

Listened to an NPR show recently about planting Native Plants. Thought you would be interested in hearing it also...

Hi,I believe you have a Parijat tree in your garden. I am from south India and over here this lovely shrub is planted only in temple premises. Is it against traditional convention to plant it at home. Please do let me know.

How wonderful! It is so lovely when someone takes us on a tour of their home country, I would love to visit India one day! Jodhpur will definitely be on the list!

Beautiful post!! I am very interested in India, and I hope to go someday soon. As a student of religion, I found this post very insightful. I will definitely be returning for more!!

The trip must have been glorious as evidenced by your photos. Your 'Little One' is looking quite grown up these days.

Thank u ;-) check out this emo boy one at this blog:
http://www.emo--boys.info

Wow! I love Rajasthan and have wanted to visit Pushkar forever. Thank you so much for the tour. This would satisfy me until I visit the place for real. I love the artwork especially the elephants decorated with colored glass pieces.

Good brief and this enter helped me alot in my college assignement. Gratefulness you seeking your information.

How I've missed reading your blog posts. I felt as if I was visiting Rajasthan alongside you. The info on camels made for interesting reading. I had no idea that they could live to 25. What incredible animals they are. Your daughter is growing so fast! It is so true how our cultures have different and often odd traditions.

Hope you have a wonderful year, dear Green Thumb!

how beautiful! I could do without the rats. They terrify me. Thanks for taking us on your New Year's journey.

your pictures show such beautiful places! :)

You have a really nice site. Lots of resources. My blog is all about health and nutrition. I want to invite you to come check it out.

My friend and I were recently talking about the prevalence of technology in our day to day lives. Reading this post makes me think back to that discussion we had, and just how inseparable from electronics we have all become.


I don't mean this in a bad way, of course! Societal concerns aside... I just hope that as memory becomes cheaper, the possibility of uploading our brains onto a digital medium becomes a true reality. It's one of the things I really wish I could encounter in my lifetime.

Virtual Memory sure is becoming cheaper these days. I wonder when we will eventually hit the ratio of 1 cent to 1 Gigabyte.

I'm still waiting for the day when I will finally be able to afford a 20 TB drive, haha. But for now I guess I will be satisfied with having a 32 GB Micro SD in my R4i.

Hey. I really like the blog. I submitted it to reddit and digg because i think more people need to read it! Also, I have a blog too if you want to check it out. It's called Pioneer Amplifier

Nice brief and this post helped me alot in my college assignement. Thanks you for your information.

Today is my lucky day :)
Apple is giving review copies of iPad to 100 lucky person. Go to http://bit.ly/cmmVr7 and apply for it.

Like many of your race, you are a wonderful story-teller...I could almost hear peacocks and sitars in the background as you told your anecdote :)

I learned so much on my trip to palaces I shall never see in reality but which intrigued me so much :)

I loves seing you share it all with your little girl...so very beautiful and more precious than words can say :)

I love reading about folklore and legends and culture from all around the world...so thank you for sharing part of yours :)

Even you can get that attraction of Bikaner palace.

They came, they won and they left. However, the chance is still there for you. Srividya, Aditya, Kritika, Tushar - be the next one, before the chance is no more left for you.

Give yourself a new look in the 2010 summer and compliment yourself with a new pair of contact lenses. There is only few more days left for this opportunity. So get set and get ready to be crowned as the next Model of the week.

Hey thanks man!! you are so good. I think this the perfect work.
Growing Plants

Rajasthan is famous for it's art, palaces ther is full of fantastic artwork, I loved it very much...