Beginning of October has seen some sudden drop in the night temperatures, though the days are still very warm and sunny. Usually this drastic change of weather is an invitation to flu and that is what bugged my daughter and then the rest of us over the past few days. It is really a surprise that despite such advances in medical science, with all that research going on in the fancy areas of AIDS, cancers etc, there has not been much one can do about flu by way of medicines. 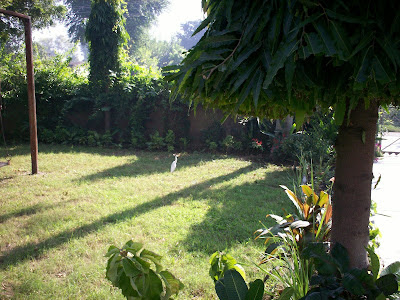 Well with, hopefully, my seasonal quota of illness over I set out to take a measure of things in my vegetable garden, and there the leaves of Colocasia had turned yellow and started falling-time to harvest the tubers or corms. It was around 7 months back, in the month of February, that I had planted the corms. Thereafter the bed was left all alone except for hoeing and earthing one or two times in the following four months. 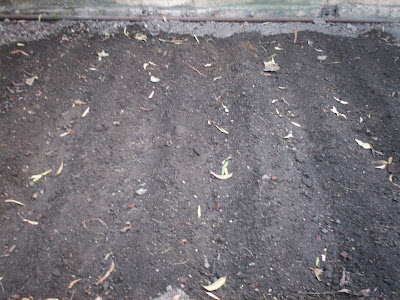 Without any pestering or pampering, the corms continued to mature below the soil and signaled their presence in April by giving out the first leaves. 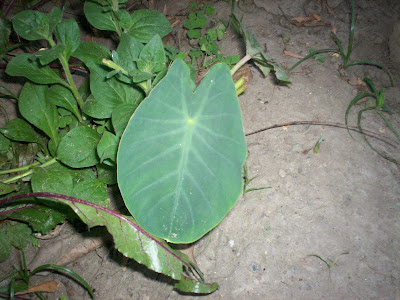 The rainy season(monsoon) which followed the month of May-June was a boon for the leaves as they acquired reasonably big proportions in it. In some homes, the fresh green leaves of this plant are coated with gram flour and fried, the resulting ‘patodas’, as they are known in local language, are very crisp and spicy. They induce a slight 'stinging' sensation to mouth and the throat, and are loved precisely for the same reason; not everyone likes that though.This stinging sensation is due to the presence of calcium oxalate crystals. 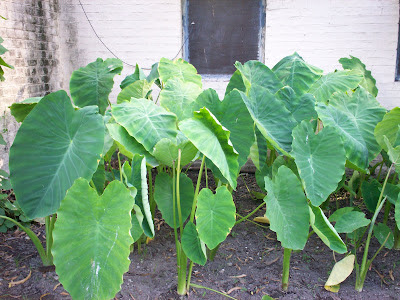 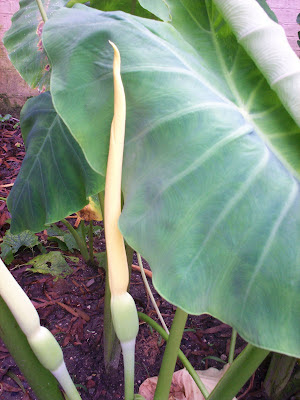 Now the leaves have started turning yellow and some of them have fallen off, signaling the time for harvesting the corms 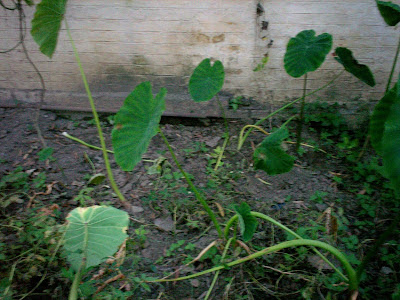 The corms are now dug up… 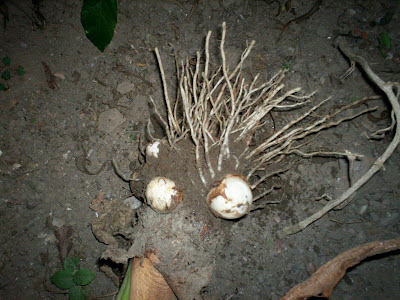 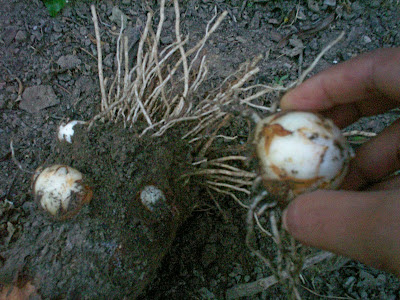 The mother corm is then stored in a dry place to be planted in the next growing season. 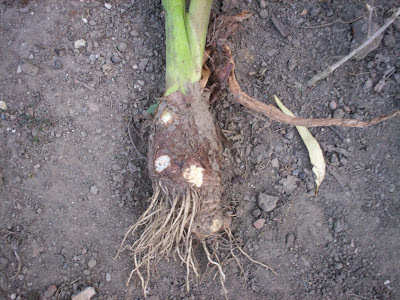 Finally the potato like starchy corm is ready to be cooked and eaten. Colocasia esculenta, also known as Arabi here in India and Taro in many countries around the world, is a widely eaten vegetable. It looks and tastes like a potato, but is nutritionally superior to potato, and the leaves too have a nutritional value same as that of spinach.The corms are a good source of Carbohydrates and Potassium.They also contain good quantities of Vitamin B complex. 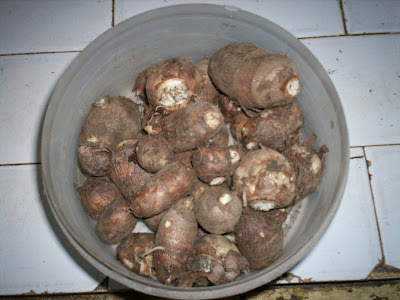 As an afterthought, I feel, that till the time a definitive treatment for viral nuisances like flu, is found, we will have to trust fresh vegetables and fruits to ensure a speedy recovery, and if they are home grown, it is- good bye flu!
Posted by Green thumb at 6:31 AM

Hope you both get well soon.
In Trinidad the colocasia leaves are prepared the same way-coated with the spiced flour paste, rolled and sliced, then deep fried-its called "saheena". It is one of my favorites but being deep fried I eat it only occasionally, now. People wash the leaves with lime juice to remove the "scratchy" aspect.

This is a very interesting rop to grow as you can eat both the corms and the leaves. And I like the way it looks too, the leaves are lovely.

The flu will be with us for a long time it. As you know it's a virus so antibiotics won't work. The flu virus mutates at a very high rate so it's very difficult to make a vaccin that works over a longer period. Fresh veggies and fruit, especially the homegrown kind, are still the best medication, I agree.

We like to eat the leaves in "patra", which sounds very much like Nicole's "saheena". I've not actually made patra myself - it seems very time-consuming, and we can get it ready-made from the freezer case at the Indian grocery stores.

Hope everybody is feeling better.

Nicole and Entangled may know about this plant as a crop, but it's new to me - and very interesting.

I've seen a few people here in Austin growing some kind of ornamental Colocasia, [sometimes called Elephant Ears] but I don't know if it's Colocasia esculenta.

I do hope this bout will fulfill your flu obligation for a long time, GreenThumb, and that you and the little one stay healthy!

Get well soon, dear Green Thumb. What an amazing post seeing everything from start to finish. Enjoy the fruits of your labour. I hope they chase the flu bug away...for good :)

What a great post and an interesting vegetable. You are lucky to have a lot of space to culture one. I hope your family gets over the flu fast. Kind regards, Andrea

GT: That is a nice lesson in growing Colocasia. I tried taro once...I think one has to develop a taste for it!

Just discovered your blog - makes the continents between us seem so less distant to see another person so passionate about gardening! I always wondered what corms looked like!

Get well, and thank you.

Interestingly, colocasia leaves actually provided one of my first food memories. I was in kindergarten and a little boy offered me a bite of his lunch "sandwich". It was a sada roti ( similar to pita)stuffed with cooked colocasia leaves ( a dish called "bhagi") and a slice of cheddar. I absolutely loved it and went home to excitedly describe the food to my mother and sister, who identified what it was for me and promised to prepare it sometime.
I was quite surprised in 2005 when I was served the colocasia leaves cooked the identical way, like a bhagi,as a side dish in an upscale restaurant in Ghana!
Incidentally, for those who know the famous dish "callaloo" the colocasia leaves and okra forms the basis of this on many island.

It is interesting that you too, are starting to experience fall-like symptoms too. I hope that your flu is better and that you and your family remain healthy now.

Give a hug to your adorable little sweetheart!

I'm so pleased I've visited your blog - I love to find out what other people grow and your garden is full of gorgeous things. Hope you're recovering from the bug (it's got us this week too!) - but wholesome veggies are so comforting!

Readers should not that there are edible and non edible varieties of colocasia!

Feel fre to use my photos for privat use.(As long as you don't make many from them). I would like if Heimdalhagen are written on it somehowe. It's so nice that you like my photos! I hope you understand my bad english...

I never knew you could even eat these!

Thank you so much! I have always seen these root vegetables here in England in Carribean shops but haven't known what to do with them. I tried plantains recently and loved them. I will definitely try them now.

As for the flu... I have a Japanese friend who tells me it is the custom there to eat pumpkin in the Autumn as they believe it is a natural remedy for colds and flu during the Winter. Worth a try?

Thank you for this post. I never knew Colocasia was a food crop.
I enjoy watching your garden grow.
I also believe organic veggies from the garden is the way to healthy living! In the Autumn I eat lots of orange food, sweet potatoes and pumpkins.
Stay well,
Sherry

I hope you are all better now.
I always enjoy reading your blog and seeing what is growing there with you.
You inspire me.

Hi,
Hope you are feeling better. :)
I think what you are describing as your Colocasia esculanta is what we refer to as callalloo bush in Trinidad.
We certainly eat the tubers. We have two types- one is eddoe- which is whitish and becomes slightly slimy with cooking, and then we have dasheen which is blue when cooked and bigger. The leaves of the eddoe to itch when you handle them so they use lime as Nicole says to stop that reaction.
The more popular one is the Dasheen bush.
Why don't you try our callalloo recipe?
One bunch of dasheen or eddo leaves washed and cut into small pieces
14 ochroes cut and sliced
one onion diced
1 seasoning pepper
2 cloves of garlic
1/2 cup of sliced green onions
salt to taste or two maggi taste cubes
2 cups of diced pumpkin
1/4 cup of coconut milk (put the dried coconut (white part on inside into blender and blend with water and then strain) you can use the remainder to make coconut blancmange

Put all in large soup pot and boil for approx one hour. When everything is all mushed up and looks disgusting, you can swizzle it or put in the blender.
This is one of our national dishes.
You can come to Trinidad any time and you will be very much loved if you can cook a good callaloo. If you want you can add crab in the shell to this soup for extra flavour.
Enjoy,
Sharon

That is so neat to see these plants and know that you all harvest them for food as well. Hope your child is feeling better!

You inspired me! today I went to a carribean shop in London and bought some taro root. Awaits the taste test. I have also been a keen fan of callaloo soup - made with fresh callaloo and coconut milk - yum!

Hello! How nice that you visited my blog! Yours is wonderful! I have eaten taro chips here, and in southern California...and loved them!
Julie

Hello there I was really interested in all the comments about the taro , I live in cambridge and it's a bit cold to grow taro, but this year I've got hold of some corms and I've planted them , so we will have to see, I was fasinated by the idea that you can eat the leaves, even if they sound a bit unusual, like eating a pain of glass ?, wow very interesting, best wishes james

I really enjoyed seeing the growing of this crop throughout the season! I love this vegetable- both the leaves and the corms. There is a good recipe here for the leaf-rolls if anyone is interested...such a treat not to be missed! and yes, the edible variety- shown here- is colocasia esculenta.

How do you know which is edible or not?

Thanks Sharon. In India we use a medley of vegetables alongwith colocasia similar to your recipe but use tamarind pulp to remove the irritation. This is a special dish for the occasion of Rushi Panchami day(the second day of Ganesh Chaturthi festival that falls in September)

Clear tarpaulins are ideal for tasks that require a high level of light infiltration. Clear Tarpaulins include 50cm of spacing between metal eyelets on all four sides, as well as PVC reinforced hems. These are used to hold and collect debris during painting as well as during building construction. These heavy-duty tarps are ideal for jobs that demand maximum light transmission. These covers are lightweight, eco-friendly, easy to apply, don't blur, are wearable, highly waterproof, don't strip, and are robust. These are composed of high-quality materials that are stable, chemically safe, have strong sun security cell reinforcements, are resistant to maturing, and are practical.