Winters are on ebb and the spring sowings are waiting to bloom. In the absence of anything more exciting in the garden, I invited my hubby, fresh from the memories of his trip to south India, to write a post on his experience.. 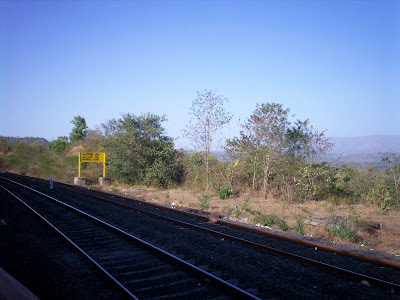 "There is something very amusing about living in a big country like India as I realized first hand when the opportunity to visit the southernmost part of country came my way. My job took me to the southern states of Kerala and GoaKerala is nick named ‘God’s own country’ and rightly so, as its natural scenery, backwaters, sprawling coconut trees and crystal clear beaches make it a near heavenly abode. Sea has always enamored me and this sojourn through the backwaters was Godsend 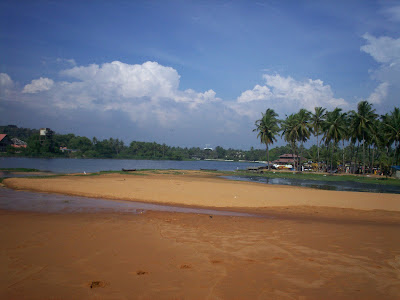 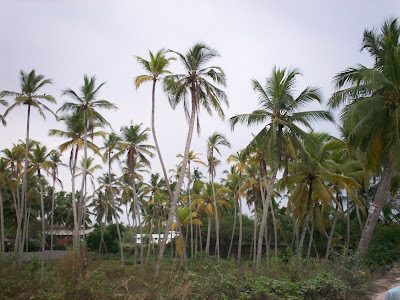 I was quite surprised by the contrast southern India had in respect to where I live; it was like descending on a different civilization altogether. The weather was very hot and humid in contrast to the cold wave haunting us in North. Another difference, as I shamefully admit, was the exemplary cleanliness and discipline in the lifestyle of South in contrast with the chaotic North. 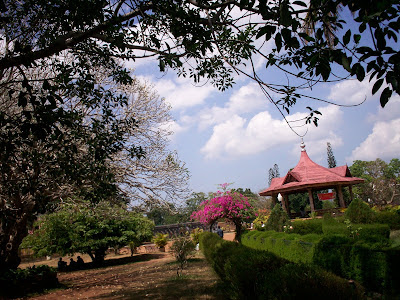 The place abounds in coconuts and as generally happens locals devise ingenious ways to put the surplus to good use; these cute simians are made from sculpting a whole coconut; one can even hear the gurgle of the coconut water on shaking them! Southern India falls in the Tropical zone and the lush greenery testified to the equatorial climate of the place. 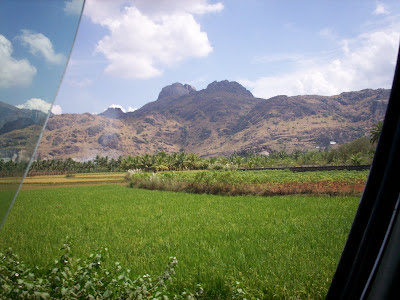 Difference in weather was evident from the trees laden with unripe mangos, which do not appear before April on trees in North. 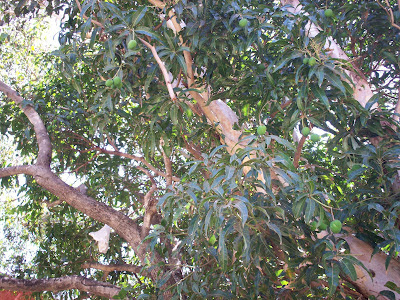 Shortly after getting acclimatized to the changed weather conditions my tour took me to Kanyakumari, which is the southernmost point of Indian mainland 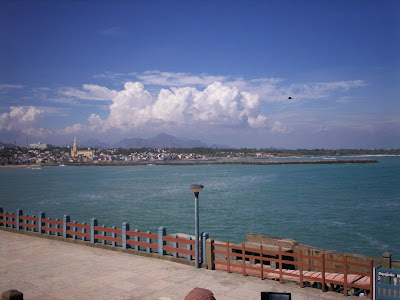 A 15 min ferry ride took us to these two small pieces of rock, which may loosely be called Islands, although they are woefully small to be called so. It was here that the great Indian scholar, philosopher and thinker Swami Vivekananda meditated in his final days and hence the rocks are named after him as Vivekananda rocks. 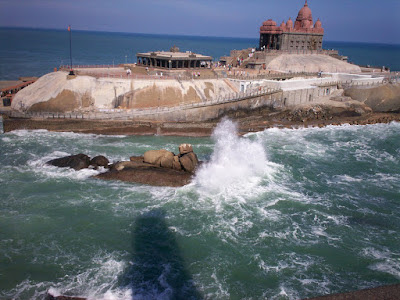 In its final step the tour came to Goa, a place which was a Portuguese colony till as late as 1961 and was acceded to Indian Union in that year. There is a distinct Portuguese influence in the culture and ethos, and that’s exactly what I loved about the place; a testimony to the fact that an amalgamation of various cultures facilitated by the migrant population makes a place very interesting and livable. This Temple, Shantadurga, although a Hindu temple, has a church like façade and it aptly illustrates the influence Portuguese have had on the life and customs of Goa. 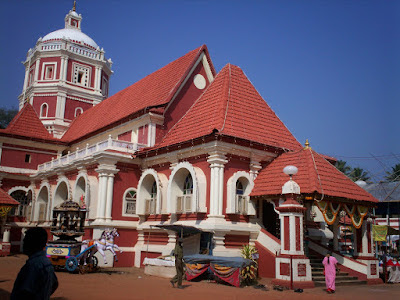 Crystalline beaches dot the whole of Goan boundary alongside the Arabian Sea and the whole place appears always to be in a festive mood; there must be something related to the aura or to the vibrations being emitted by the jovial people there, that as soon you step on Goan soil you can feel a light and happy feeling inside. 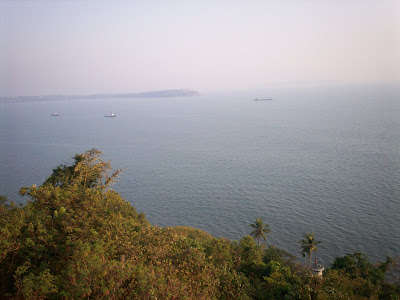 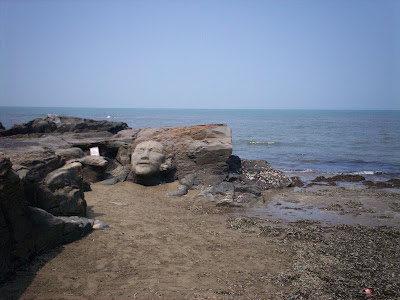 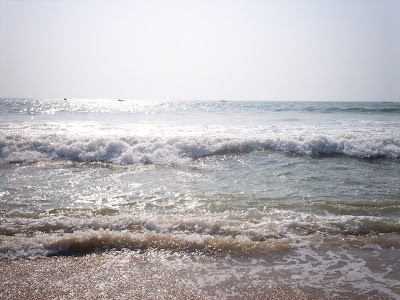 All this Sun, Sea and Beach Sand made me yearn for a sedate life near the Sea, but not before I have fulfilled my earthly obligations…not before I have collected enough memories to reflect upon in those sedate days..." 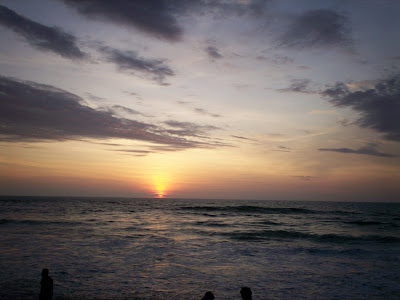 Hi,
I found your blog through Blotanical and I've been sitting here enjoying your lovely pictures. I've never been to India, but I can see that it's a beautiful country! I read a book a couple of years ago, which was set in Kerala, so thanks for showing such great pictures from that area.
/Katarina (Sweden)

This was a wonderful tour. The south looks so lush and tropical. The beaches are amazing!

I didn't realise this about Goa - the temple is really fascinating.

I loved the simians carved from coconut ... what a difference both the north and south of India are from here!

Oh, this commentary made me cry...what a wonderful place...south India! So many beautiful places to see...It seems maybe Goa would be a place my husband will one day visit with me. His degree is in Spanish, but he can speak Portugese, and a few other languages...it sounds like such a relaxing and friendly place...I wouldn't mind camping out there for a period of time!!! The climate there sounds much like south Florida, with the heat and humidity, and tropical everything. What a wonderful post! Thankyou to your hubby!!!

Hi Green Thumb,
i haven't been able to get into your blog for ages and really missed you. I don't know what the problem was but I'm glad it's resolved.
The photos look fantastic. I've always wanted to go to northern India but never felt particularly drawn to the south. perhaps I'll change my mind ...

Thank you for those photos of Kerala. I saw a TV programme recently going to a spice garden in Kerala, seeing how pepper, turmeric, cardamom grows. The gardener said that Indian cooking and herbal medicine is really one subject as most people know the medical benefits of the spices they use. I remember you did a blog last year on this subject. Could you do another?

So nice to see this landscape!
When I read Arundhati Roy's book (god of small things) I tried to imagine the landscape, because I was so fascinated with the book. And this is it!

About Goa, sometimes I wish the portuguese had learned more about indian culture, but as good eaters it is on food we feel a major influence. And it was for spices the first navigators looked for when they first arrived in India (cinnamon and pepper)

Thank you for sharing this nice tour!

Thank you for taking us on that tour! How very interesting for those not living in India.

Green Thumb - you may want to update your RSS feed to my blog. I have moved it away from blogspot and your newsfeed my not update. The address is still the same though. Kindest regards, Andrea

Thank you for that wonderful tour, dear Green Thumb. I shall probably never be there myself but your exquisite photos and your detailed descriptions made me feel I had really visited the place with you.

I loved the idea of the feeling of happiness once you had set foot in Goa. What a great memory to take away from a place. No wonder it's called God's Own Country :)

Your guest blogger took us on a great tour, Green thumb! I liked seeing this part of your huge country.
Last night my husband and I watched a Wes Anderson movie from 2007 called the "Darjeeling Limited". I don't know if you'd find it interesting, but much of the movie takes place on the train. The Indian countryside was wonderful to see - but quite different from today's photos, apparently filmed in Jodhpur, Rajasthan, India.

Thanks for the tour!

PS I put 'Darjeeling' in the search engine for your blog to see if you'd mentioned it at some time...what popped up in the search was your February 11, 2007 post. It had more than 50 spam florist comment. Sneaky spammers!

What excellent photos and text. The choice and variety of the photos have really allowed for a "feel" of the place, including the culture. The beach and coconut shots actually look a lot like specific places and beaches in the Caribbean.
This is another post that has whetted my appetite for a future visit to India!

Thanks for a lovely tour, guest blogger, I've enjoyed it! :-)

India is so big and diverse it could be an entire continent all of its own.

Love the pics of those gorgeous beaches and coastlines in the south.

If memory serves me right, the Dutch were in Goa a long time ago too.

What would the culinary/medical world be without all those lovely spices from India?

Have a great weekend!

It's nice experience to go through your blog. You have rightly written that India is God's own country.
I'm from Calcutta and also a blogger.
Thank you.
I have four blogs-and one of them is a photo/collage blog.
http://goodtreat.blogspot.com

I find all the varieties of flowers in your blog as if it is a botanical garden !

Hallo, thanks for your kind comment. On my India tour I also vitited God's Country and Kanyakumari, most fascinating spot looking at 3 oceans at the same time. I really like India and I'm sure I will be back!

Canvas Tarpaulin is ideal for protecting construction equipment, stationary goods, and outdoor clothes. These are composed entirely of cotton fabrics, making them both sturdy and environmentally friendly. These covers come in a variety of colours, sizes, and thicknesses, making them suitable for a multitude of uses. Metal grommets are on all four sides, and the tarps are spaced at a metre interval. These tarps can provide a one-of-a-kind solution for a wide range of critical functions.