Recently a very learned person, FAO director general Jacques Diouf, made a doomsday prediction with a calamitous announcement that the World food stock reserve will last only 2- 3 months! 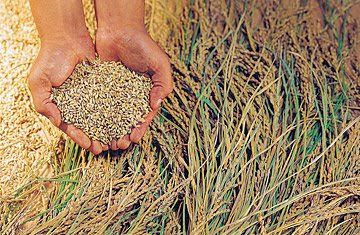 Combined with rise in international price of crude oil, it was like fuel to fire for already spiraling inflation here in India and probably at other places in the World as well. The American President ascribed the Global food grain shortage to rise in living standards of people in India and China. In turn several economists in the developing World were quick to blame Mr. Bush for diverting a sizeable proportion of land to Bio fuel production leading to a drop in food grain production.. 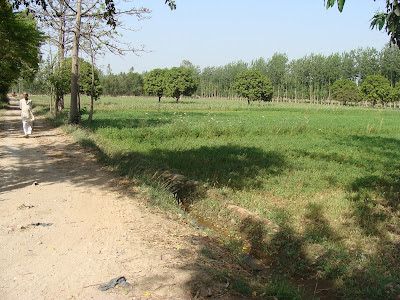 Bickering and Brickbats continue but one thing is certain that we do have a problem at hands and very soon this problem of food shortage will be staring us at face if nothing is done immediately to address it. What can an individual do to fight something which appears to be an inevitable consequence of rising population pressure on a finite resource i.e. land? 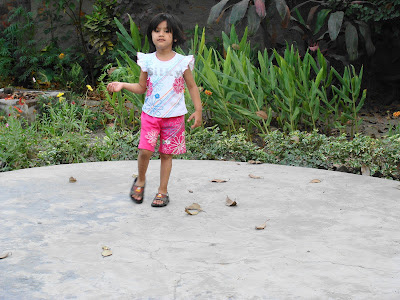 It is presumed that around 7 tones of food grains are required to be fed to produce one tone of Beef, 4 tones for producing a tone of mutton and 2 tones to produce a tone of poultry, in short eating non-vegetarian food puts a greater pressure on land than does going vegetarian. 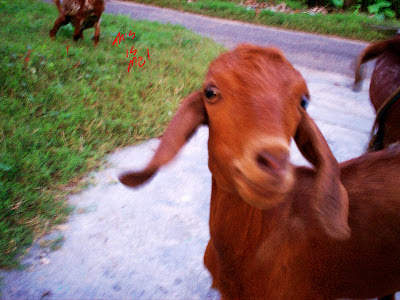 Besides, there are host of other health benefits to be got from vegetarian food; like being rich in anti-oxidants and roughage, relatively parasite free, no moral issues involved, and in general good for Heart and Health. 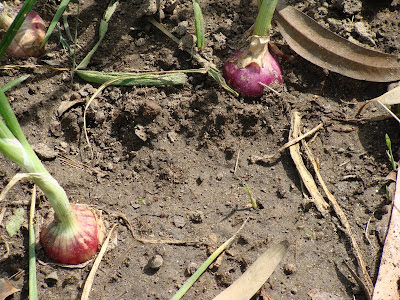 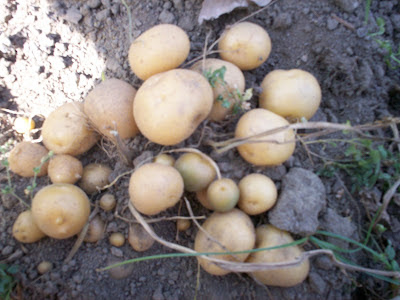 Therefore there is a very strong case for turning vegetarian as it is not only good for the ecosystem in general but also for the individual’s health directly. 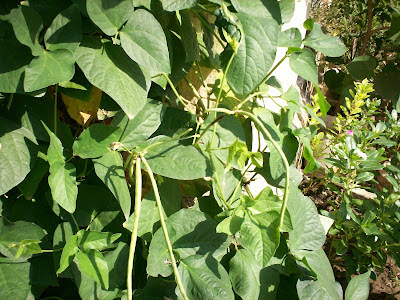 The best thing about plants – and also the best way to have them – is by growing them on your own, if possible. A vegetable garden full of healthy vegetables is a sight pleasing enough for the senses, and the feel good factor is compounded when the healthy harvest adorns the vegetable baskets in the Kitchen. 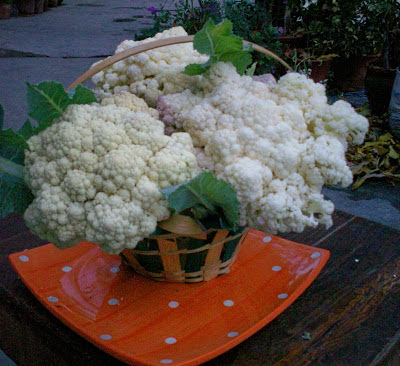 Personally I feel that food habits, like religion, are a deeply personal issue, and it is nobody’s job to tell anyone on what to eat; but the changing world equations have forced us to give the issue a thought and as a nature lover, I’ll always have a strong bias towards vegetarianism.
Posted by Green thumb at 5:02 AM

You are so right, and this is something so little discussed here in Europe! I am not vegetarian but I eat very little meat, and I am always surprised with the amount of meat people eat in restaurants and in many homes. In Portugal it is absolutely exaggerated.

A few years ago I read somewhere that half of cereal production in the world was used to feed cattle! I wonder how can it be. There are people hungry in the world and we stuff ourselves with unhealthy quantities of unefficiently produced meat!

If an ET would look at human kind he would certainly think we are mad...

You can't help but believe that vagetarianish isn't better all around! I am a meat eater, but want to move toward 90% vegies, if possible. That cauliflower is absolutely gorgeous!!!

How do you grow such beautiful cauliflower. And what a beaufiful photo it is. The colors the fluffiness of the flower. Thank you for sharing and I agree 100%.

So true and much needed.. I'm a vegetarian myself and turning towards growing edibles.. Nothing can beat the freshness of home grown greens..

Hear, hear! That's one of the reasons I'm a vegetarian and have been for a long time. I don't miss eating meat as I did not like much to start with. Even as a little girl I'd rather eat fruit and veggies than meat.

It is of course for people to decide if they want to cut down on eating meat or stop eating it altogether. But, if no one ate meat we could feed all the people on earth and no one would have to starve. And there would be no blood on your plate.

I'm a vegetarian and have been for a long time, for all sorts of reasons. But the problem of the food supply is one that would have convinced me even if I was a meat lover.

I agree that what you eat is a personal thing. My family all eat meat, though not a lot, and I cook it for them. But I do think that there needs to be a lot more publicity given to the advantages of vegetarianism.

Definitely something to think about... but it is a problem with no easy answer. While vegetables are so much more renewable, I can't say that the current practice of slash and burn agriculture in the amazon basin is good either... it's definitely causeing problems of it's own... I suspect that someone is going to have to start thinking creatively to come up with an answer we can all live with. Currently, here in America where we're losing a huge amount of our farm land to housing, I feel almost obligated to grow some of my own food in the garden, but I don't see many of my neighbors feeling the same way...

You have gotten me thinking...not only about vegetarianism, but also got me thinking about growing food, and now I am an expectant gardener...awaiting my tomatoes and yellow beans!!! Thankyou!

OK...I've gone two days vegetarian now, except for a little octopus yesterday, and a few bites of chicken today...but all vegies otherwise...and am working toward TOTAL vegies...hopefully tomorrow!
Thankyou for inspiring me!

Your site is wonderful and I love it. All the flowers you have remind me of my childhood. My mother was an active gardener and I used to do that when I was in Benaras and here in the U.S. I still buy plants and try to keep them alive in the patio. Keep writing about all the plants. I was trying to find the Botanical name of Rangoons Creeper and was happy to see that in your Blog. Here in Florida, we do have many plants that grow in India,but I don't know of the Botanical name for all the plants. It is good to see that in your site. Thanks for sharing your garden and knowledge with us. amma

Great post, Green Thumb! I've started reading more about food production throughout the world and the problems are staggering. Especially here there is a growing concern about the bio-fuel industry and diverting grain and legume crops to growing corn and other bio-fuel crops.

Good post green thumb. I am definitely a meat eater though. I have lived my whole life as one. I don't know if I could change now, though for health reasons I know I should, not to mention for environmental reasons.
Here in Australia we are still suffering the effects of a long term drought even though other areas along the coast are out of trouble now, we people from inland where most of the grains, fruits and vegetables are grown are still in trouble. The effects of global warming have caused the rain bands to shift away from the agricultural areas resulting in the rains we should have been getting falling over the sea.

Hi, Your blog is wonderfully written and your English is impeccable.

I have been a vegetarian close to a year and nearly everyday I think of countless reasons why vegetarian better and why it feels better. My only regret it not becoming a vegetarian earlier, since I always wanted to.

Great post! And your blog is great too. My husband and I are vegetarians and vegans. No dairy, meat, fish or poultry. You are absolutely right.
It's not like Global Warming is just some external thing that is happening on it's own. We have to look at what we are doing that is causing it and then try to do our part as much as possible to turn it around. If we continue in the same old ways, we will soon be faced with life and death choices. It's happening! We need to WAKE UP!
Before it's too late if not already.
Thanks for putting it out there. We need to see more of it.

Beautifully produced post. Very important words. Thank you kindly. I had the good fortune of spending some time with Devinder Sharma in Santa Cruz, California a few years back. You may already know of him (http://www.mindfully.org/devindersharma/Sharma-Biographical.htm)
A search online brings up an abundance of articles and interviews with him.
xo Sylvie

I agree with you 100% about this, and have started growing vegetables instead of flowers wherever I can. Have you been reading the Path to Freedom website, about a family in Pasadena that has converted their entire 1/5 acre property to farming? Very exciting stuff. This can be a terrible time ahead, or it can present us with an unprecedented opportunity to change our wasteful ways.

They are cost effective and suited for a wide range of commercial, industrial, and construction applications because Heavy Duty Tarpaulin is composed of woven coated polyethylene material that is both sturdy and dense. These covers can withstand the stresses of construction projects and are ideal for patios, pools, automobiles, and other locations where a protected tarp is required. These blankets include metal grommets at 18-inch intervals on all four corners, which provide the tarp structure and toughness. White wraps have heat-welded seams and are constructed of high-quality hems strengthened with reinforced corners and rope.