Things on professional front had kept, most of my time and nearly all my attention, diverted from anything else, including my blog and gardening. But thankfully, despite my compromised attention the blooms have continued and even the Weather Gods have been benevolent; showering their watery blessings on the parched plant souls. The Rainy season here, which is popularly called as The Monsoon, has arrived and hopefully – if the weathermen can be trusted – we are in for some dark drenching days ahead. With these thoughts I present my Bloom list as part of GBBD started by Carol at Maydreamgardens: 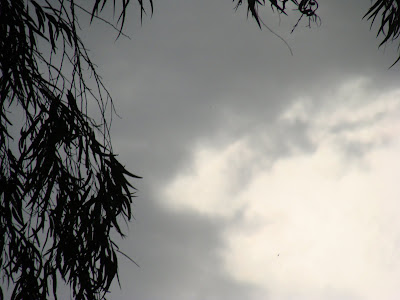 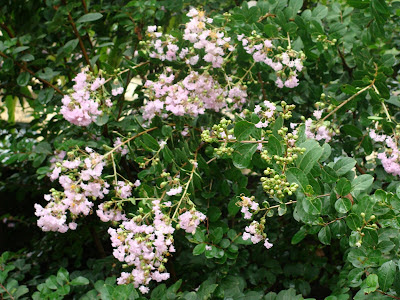 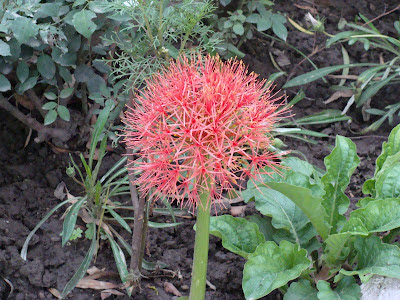 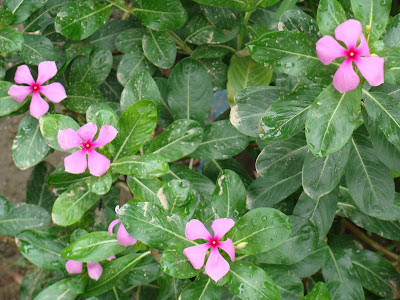 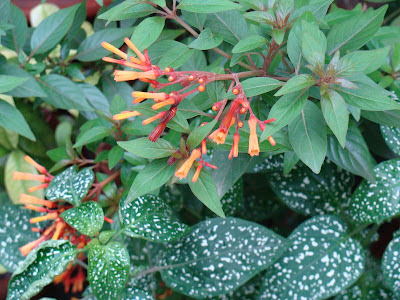 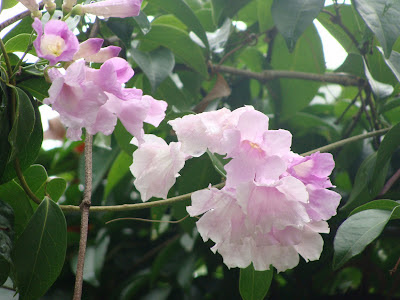 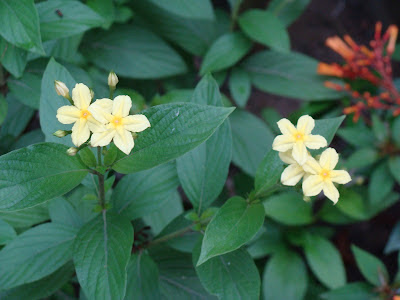 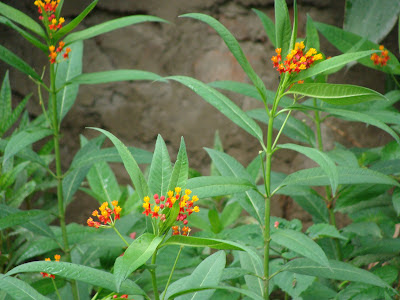 Gladiolus, though not fully open... 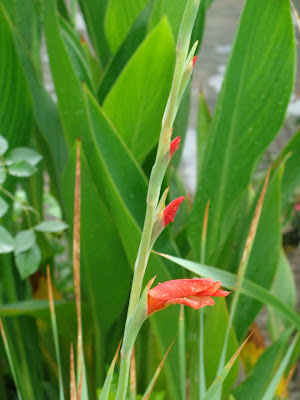 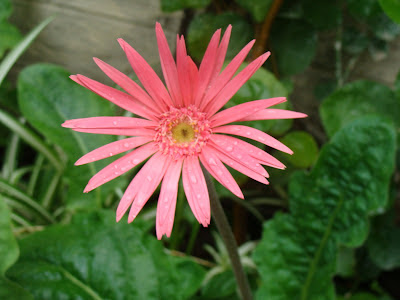 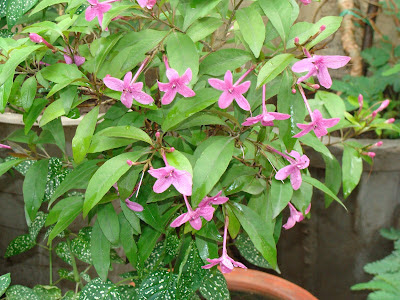 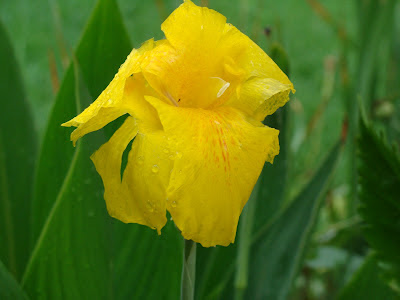 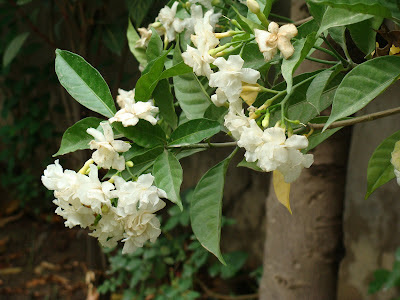 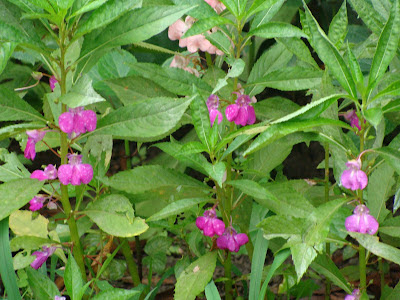 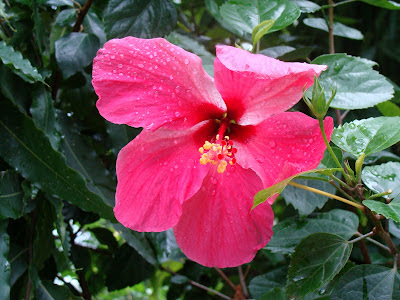 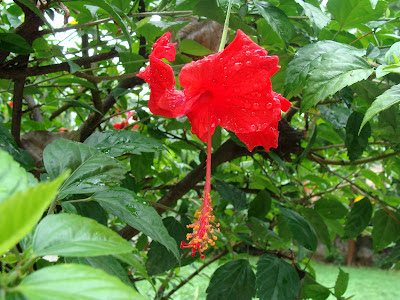 This is an unknown bloom which I bought from the nursery a few days back. Any guesses?? 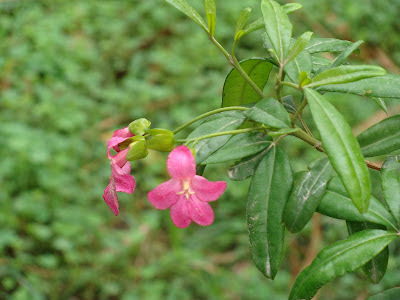 All my blooms are drenched in rains, rain drops can be seen on almost all of them, still they appear very cheerful and happy! Good times ahead for my garden.... P.S.- The bloom was later identified by 'Debofkolkata' as Lemonia spectabilis. Thanks a lot!
Posted by Green thumb at 4:47 AM

Lovely pictures! That garlic vine is outstanding - I've never seen anything like it before.
Happy Garden Bloom Day! /Katarina

Great blooms, your garden flowers are similar to my

It all looks beautiful! I love that firebush, thanks for providing the latin name too.

Lots of loverly colors-esp the garlic vine, gerbera and and firebush. I also like the new flower, though I also have no idea what it is. the crape Jasmine also look lovely, and fragrant. Here the local name is call it gardenia, or jasmine gardenia.

I hope you will get the needed rain, Green Thumb - and although the upper US midwest is having terrible floods, we sure could use rain here in Austin.

The Fireball lily is also grown by Pam at Tales from the Laboratory. I think the botanic name was Scadoxus. They're quite spectacular! And so is the red hibiscus.

Can't help you on your new plant. Great blooms though many plants I can grow here in San Antonio. I love the garlic vine. I've never heard of it before now I'm going to go check it out. I'm a vine addict.

Lovely pics ! I'm in India too and thoroughly enjoying the rain after the long hot summer.
Here in Mumbai, its time for my orchids to draw a deep breath and get ready for the flowering season. Its a real sight!
By the way, I have the garlic vine too. I planted it hoping it would keep snakes away, as I was assured it would. No luck! The resident cobra slithers right through it.

First time visitor to your blog. You have a wonderful garden and pics are stunning. Looks like I will have to spend considerable amount of time in your blog now :-)

You have a beautiful assortment of blooms as always. As you noted in your comment on my bloom day posts, it is interesting how the same flowers bloom at such different times around the world.

Thanks for joining in for bloom day.
Carol, May Dreams Gardens

Each time a flower blooms in your garden it seems that you are ready to capture it in your camera it!

1. Could your new plant be a pink Mandevilla, or Allamanda? It just immediately popped into my head as a possibility.

2. I read through your comments and saw what Sunita said about a COBRA snake in her garden! Are Cobras common to find just slithering about over there??? YIKES!!!!! I would love to visit Mumbai some day, but with Cobras...not so sure!!!

Happy GBBD Green Thumb and what a lot of blooms you have to show. I didn't join GBBD this time as I was on holiday in Scotland.

Your Periwinkle looks very different from mine, would it do well in a more temperate climate, you think?

Your Balsam is already in flower I see. I think I'll have to wait a little bit longer before mine start flowering.

Wishing you lots of cooling and invigorating rain!

I always enjoy looking at your wonderful flowers! If you have time to take a picture of the monsoon rains I would love to see some!

Your skies look very much like mine here in Canada! Lovely color in your garden! Mine are filled with roses and peonies and much much more! I came in by way of Sunita! Nice to meet you!
Wishing you a wonderful day in your garden! :)NG

You have a beautiful garden :)

I love the garlic vine and the ball lily. Your garden is filled with beautiful blooms. The hibiscus are sensational, Green Thumb!

The ball lily is a great color and all your garden is ablaze with beauty. I'm happy to see you had time to stop and smell the roses.

I'm always astonished to see how many of the same flowers are growing in your and my garden, though we live on different continents and don't have the same climate zones. I'm glad that through blogging I have the chance to see an Indian garden.
Greetings from Switzerland,
Barbara

Green Thumb,
Annie at the Transplantable Rose sent me here; she said you are growing a Dwarf Mussaenda and there it is in full color for me to enjoy! I just purchased a tiny one from a local nursery, and really don't know how to best take care of it or what to expect. Suggestions?

I was going to write about how amazed at the number of plants we have in common, though on other sides of the globe. And then Barbara in Switzerland said the same thing...we ARE all connected, aren't we?
Robin

They are cost effective and suited for a wide range of commercial, industrial, and construction applications because Heavy Duty Tarpaulins are composed of woven coated polyethylene material that is both sturdy and dense. These covers can withstand the stresses of construction projects and are ideal for patios, pools, automobiles, and other locations where a protected tarp is required. These blankets include metal grommets at 18-inch intervals on all four corners, which provide the tarp structure and toughness. White wraps have heat-welded seams and are constructed of high-quality hems strengthened with reinforced corners and rope.