In Search of Peace

It has been a disturbing last week. It is only now that the dark clouds of the worst ever terrorist attack on India have begun to settle down. Events over the past week which involved an attack on India’s iconic symbols in Mumbai by a handful of brainwashed individuals have left us permanently scarred and insecure.

A fallout of the terrorist attack has been an unprecedented anger and resentment against the country’s corrupt politicians; those who have sought to pursue their narrow minded, divisive, vote based agendas, overlooking country’s real needs; like security. The Silver lining in this otherwise darkest moment of all times has been the uniting together of all the countrymen as one. It was a heartening moment to see people across diverse creeds and faiths talking in one tone, spewing their anger against the common enemy- Terrorism.

In fact, as is the situation today, with the serpent of terrorism raising its ugly head everywhere, it would be a narrow minded approach to limit the spirit of unity to a country specific; it is a global problem to be tackled by all the democracies of the world, united in action and spirit. That will be true globalization, when the countries will unite to wipe out the ideology of terrorism, when the global boundaries will dissolve, and when we can attain that perfect world order where the need for keeping armies is rendered redundant. 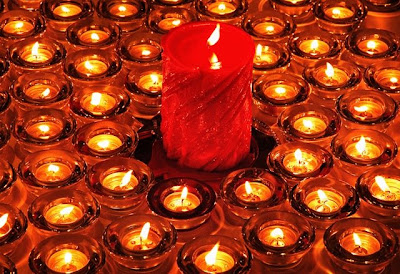 Dear Green thumb, it has certainly been an awful week and we have followed everything in Mumbai on the TV. It is so dreadful! What has happened in your country and my thought are with you. Were did all the peace, love and understanding go. It is so much violence and hatred in the world. Love Tyra

Dear Green Thumb...I cannot agree with you more! I feel certain our new leader, President Obama will also agree with this! We all need to work together to this end. God Bless India, and I pray you will be healed and united in your efforts to insure future security for your country and all of us around the world against these aweful people!!!

I was glued to the Television for most of the Thanksgiving holiday, appalled at the actions of these misguided souls... I also must admit to looking at the atlas to make sure that you weren't too near what was happening. I also remember the unity that swept across America after the 9-11 attacks. All of us can only hope and pray that our leaders will be able to develop some wisdom and bring terrorism to an end.

You're exactly right, GreenThumb! Every individual should feel the same and destroy this enemy forever.

LINDA from Each Little World said...

We have all been watching this horrifying event with sorrow and concern. In the U.S. we hope that our new president will bring a greater emphasis on peace and diplomacy. I just discovered your lovely blog and it is a very peace-inducing moment to think of you gardening in India and sharing it with all of us.

Our thoughts and wishes for peace are with you. One of my countrymen on a business trip to Mumbai was locked up in his room till the soldiers came in and killed the terrorists who were two floors below. He's very lucky.
Just the week before I was reading The White Tiger in which Aravind Adiga was very scathing of the corruption.

I have been thinking about blogging friends in India ever since the news broke. It was a dreadful event, and must have been terrifying for everyone. I hope some good comes of it, in the ways you forsee.

Peace to you and yours--
--Kate

Hello Ms GreenThumb,
I have enjoyed browsing through the beautiful photos of bright flowers and other interesting things--birds, etc. I will try to check back now and then to see what else is happening in your garden. Also, my thoughts are with you and the people of India. Jan

Amen to that!
The one bright spot in this ugly, tragic episode are the myriad instances of bravery. Hotel staff guiding the guests to safety and in some cases taking the bullets themselves so the guests could escape, the policeman who held on to the machinegun of the surviving terrorist in spite of being pumped full of bullets just so his colleagues could escape and take the gunman alive, the NSG major who threw himself in the way of the gunman's bullets so his fallen comrades could survive... they just go on and on. I wonder if we'll ever hear all of it.
Do you know what makes me really, really angry? Knowing that Mumbai gives 50% of the taxes which fills the nation's coffers , yet our security is so badly neglected. The city's police force were armed with ancient self-loading rifles and many of them didnt even bullet-proof vests. Against AK-47s!
And guess who's got the sten-gun toting guards surrounding them? the politicians! Disgusting and so tragic!

The company I work for had crew members staying at one of the hotels hit, it was very difficult not knowing the fate of our co-workers, thank god they were OK. I hope the best for you and your country and my deepest condolences to the family of those lost. I believe that evil will never win, free and democratic countries will.

You've said it very well dear Green Thumb, what more could I say but amen?

My heart goes out to the people of India. We understand your grief - It happened here in London not so long ago.

I hope things are improving in Mumbai. The news here in the US is back to our own politicians and events, so we haven't heard any updates on your area lately. It could have been in the papers, though. I haven't been getting them read because I eat my breakfast at the computer these days.