The Himalayas are home to some of the most breathtaking locations on this planet. This time, thankfully, my jaunt did not end with nainital, rather we went deeper into the Kumaon hills to the idyllic locations of Kausani and Ranikhet. 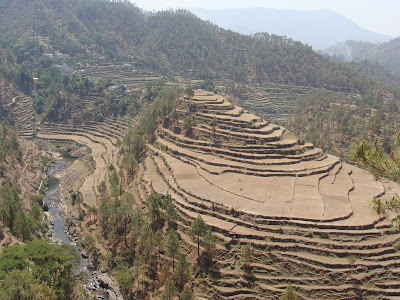 A 4 hour drive form nainital had me transported into a different world altogether; quaint, pristine, absolutely untouched by the maladies of urbanization. 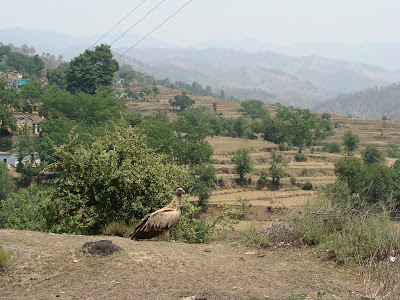 Kausani, at an altitude of around 1900mts is situated near to the snow capped higher ranges of Himalayan Mountains, and that makes the place ideally suited for a panoramic view of Himalayan beauty. Unfortunately, it was cloudy all throughout my stay, and so I could only catch a faint glimpse of the snow covered ranges. 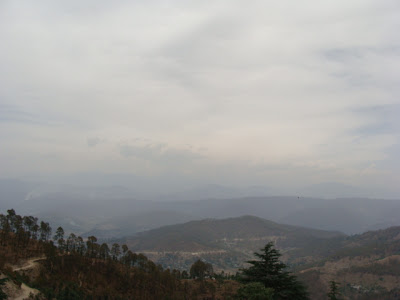 It is at these sorts of places that the feeling of ultimate calm and unison with nature descends. No honking horns, no cacophony of the modern day traffic, no humans jostling through the morning crowds to reach their workplace, just plain lazy contemplation on the why’s of life, over a cup of tea with the mountains in the backdrop. 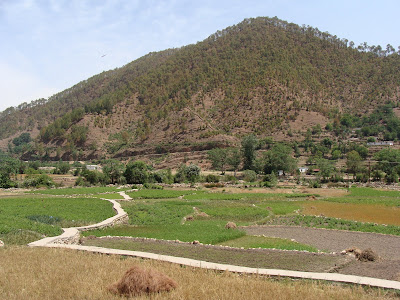 The landscape of Kausani was dotted with beautiful sights of terrace farming. The farming here, thankfully, is as yet untouched by the menace of fertilizers and pesticides. This fact was all too evident in the taste of food, as it was a pure gourmet delight. 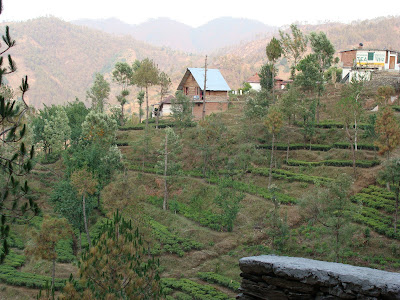 At a small distance downhill from Kausani is a small cluster of fairly ancient temples – believed to date around 12th-13th centuries - known as baijnath dham (abode). 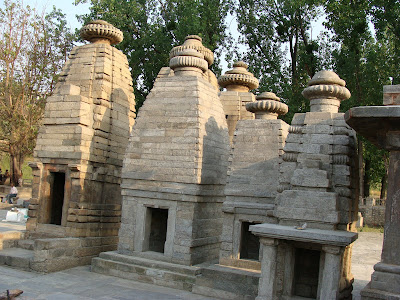 The Gomti river nearby had huge gluttonous fishes which are regularly fed by the pilgrims who consider it auspicious to do that. 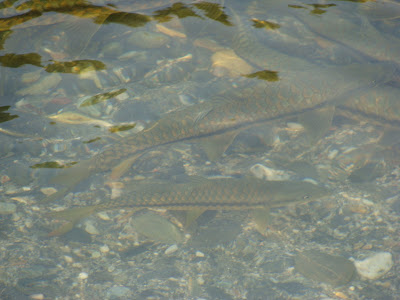 Leaving kausani was like leaving the soul behind. The aura of Kausani meant that probably no other place would seem worth a visit now, as it would invariably be compared to it. But to my huge relief, on visiting Ranikhet after Kausani, I learned that every place carries its own unique charm and that renders any comparisons meaningless. 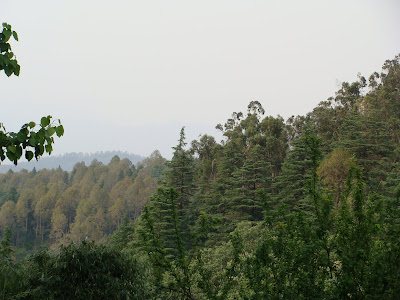 Ranikhet is another beautiful jewel in the Great Himalayan crown. A quaint cantonment town with fruit orchards and wild life sanctuary all around it is an ideal getaway. And if one gets to stay in a resort in the middle of the high altitude jungle, the memories are going to last a lifetime.The resort, where I stayed was an old heritage building built during the colonial era and converted into a hotel two decades back. 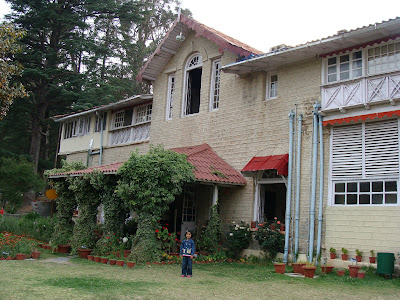 The rooms had a vintage cozy feel, and the view splendid. 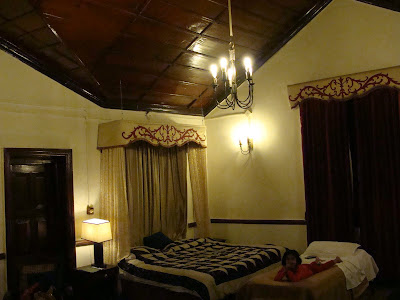 I could even catch a shot of this colorful parrot from the window, trying to steal a peek at the new visitors in the room. 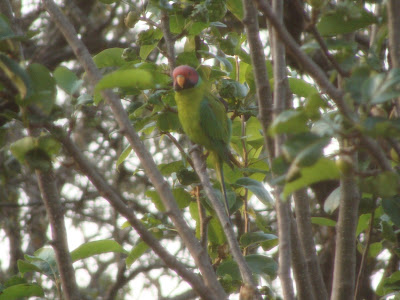 The cleanliness and the calm of a cantonment, the heady cocktail of the voices of barking deer, monkeys, mynahs with an occasional roar of the leopard, amidst the cozy comforts of a forest cottage makes you thank God again and again for giving this life and this planet. 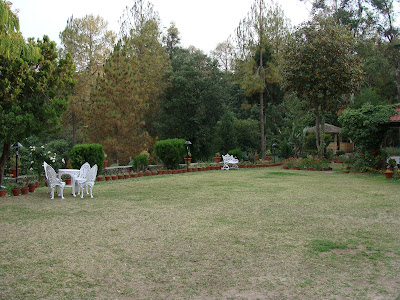 A huge golf course, at an altitude of 2000mts, from where a misdirected shot can land in the valley below! Inspired a feeling of awe at the kind of life being led by the defense personnel, who deserve all the wonderful things for the service they give to their Motherland. 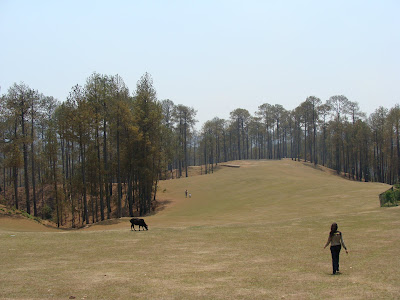 Traveling and visiting new places has a wonderful effect on mind and the body. Besides being relaxing, the very act of moving out of the confines of your daily rituals stimulates positive vibes in the body and opens new vistas for the brain. I hope the feeling will last till its time to pack my bag again. 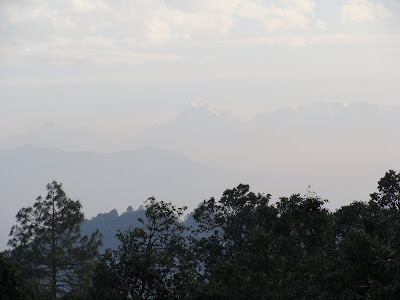 I felt a sense of peace looking at your photos. You are in a place I can only dream of visiting. Mountains have a way of making us seem like inconspicuous beings. It is nice to go to a place like this, feed our hungry souls and return rejuvenated. Now you are making me want to travel LOL. Enjoy the rest of your stay.

Oh, GT...your commentary and pictures are just dreamy! You write with such a romantic flair...makes me want to quit work and go into the beautiful country and live amongst nature. If only I would be able to find the edible part of a pine cone, or catch a fish with my hands!!! LOLOL!!! :)

Thank you for sharing these wonderful images of places I will probably never be able to see for myself... The beauty and peace is awe inspiring. After seeing places like this, you wonder why you ever wanted to live in a modern city...

Wonderful, thank you so much for the guided tour of this paradise. I wish I could have been there to see all those lovely sceneries and the air must be lovely there.

Have a great weekend/ Greetings from Vaxholm TYRA

Peace and solitude rule at higher elevations don't you think? Beautiful photos and thanks for taking us along on your trip.

I can almost smell the fresh air from here! How wonderful, I would love to travel there - I will add it to my list!

I want to be there so badly! Thanks for sharing.

Thanks for sharing your trip to this most unique place with us and how lucky of you to go there. The pic of the small cluster of fairly ancient temples is lovely.

GT, you lucky lady! Imagine taking off to the mountains while the rest of us are drowning in the misery of a summer that is just too long and way too hot!
Ranikhet looks lovely... I must plan a trip there soon. And that parrot looks like a really cheeky fellow ;)

I think you can call it Gods country.
Just amazing...I'm in love.
Wish I was there.

Oh my goodness! What fabulous pictures! Thanks for sharing these with us!

The absolutely stunning vistas and your atmospheric words transported me to such a beautiful dimension. Thank you for sharing :)

Would you like to watch a little video of Barleycorn in June? Here is the link below...

You are absolutely right "Traveling and visiting new places has a wonderful effect on mind and the body."
I wish if I could travel like you.

your narration was impressive