Just when I thought that life has gone on at a pretty lull pace for a long time, came the news that my hubby will have to go to Kashmir on an official trip for 10 days. Had it been the period before 1988 we all would have looked forward to the trip and in all probability i would have attempted to join him. But since the region – though one of the most beautiful on this planet – has been in News for all the wrong reasons, I was forced to stay back and pray that everything goes well. Well, thankfully, everything did go well, and he came back rich with memories and stunning photographs of a virtual paradise on earth. 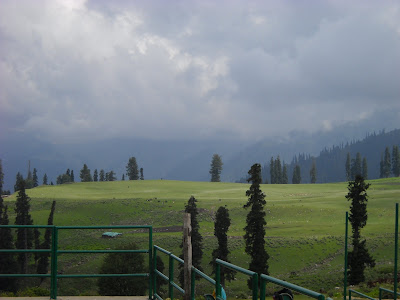 Srinagar, the capital of Kashmir is a breathtakingly beautiful valley in the northern Himalayan ranges. The temperatures were most comfortable in the range of 25-28 degree C, and the morning view from the room was a stunner. One could see snow on the mountain tops even though late July is a peak summer month. He was told by the locals that these are the hottest months in srinagar (they should visit the north Indian plains to see what heat is all about!). So, for late July, the hottest in Srinagar was cool enough for him, and it was a pleasant surprise to see that security situation in that place was not at all as deplorable as the general perception is. 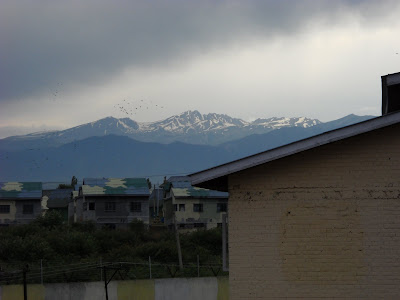 The place abounds in gardens, with some of the very famous Shalimar and Nishad gardens leading the pack. The pictures of these beautiful gardens with Himalayan ranges on one side and the pristine, pure Dal Lake on other, made me yearn to have the experience first hand. 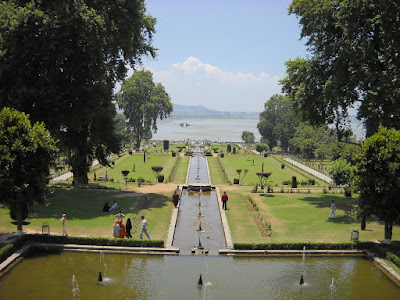 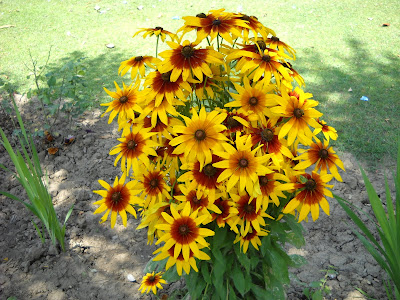 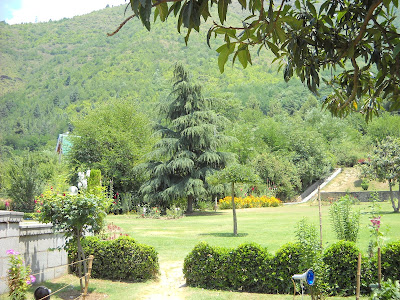 Dal lake is a landmark almost synonymous with srinagar. The lake is unsurpassed in beauty, with beautiful houseboats of Victorian era lining its both sides. One can stay in these house boats and enjoy the divine natural beauty – lotuses, water chestnuts, lilies, and numerous exotic birds which throng the lake. 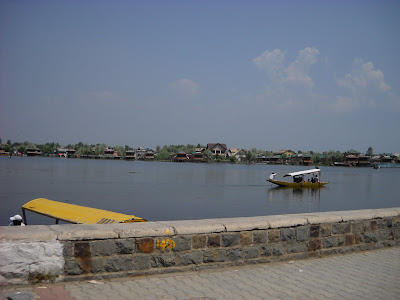 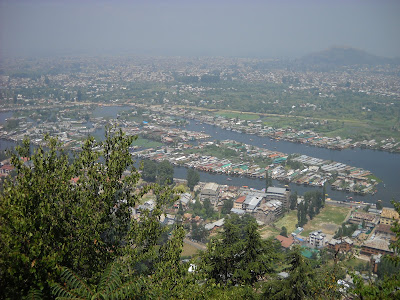 Gulmarg is one lovely hill station atop the Himalayan range encircling Srinagar valley. It was again – a paradise within a paradise. The slopes of the meandering roads leading to the hill station were covered in Daisies. The hill station itself was an abode of flowers: Gulmarg literally means place of roses. Hill station was bathed in crystal clear sunlight 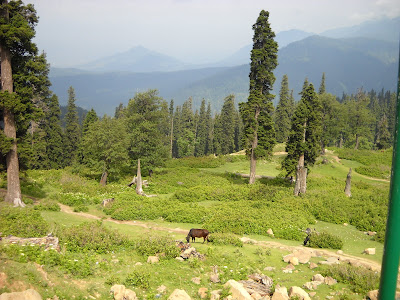 with the daisies gleaming in delight as sunlight shone on them. The slopes, now covered with flowers, turn into world famous ski slopes with the onset of winters. 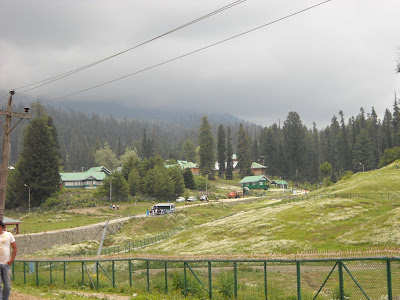 This is one place which has to be visited repeatedly in different seasons to be able to imbibe its complete beauty. During the months of August- September there is a bounty of apple crop and one can only imagine the site presented by the apple laden trees which line every path, every house. 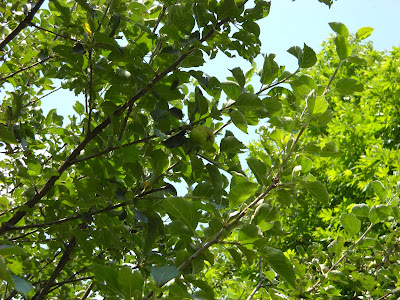 October to February is the time for snowfall, when one can enjoy Skiing on the beautiful slopes of Gulmarg. March heralds the onset of pleasant weather conditions with flowers blooming all over the landscape and especially in Srinagar’s majestic Mughal gardens. 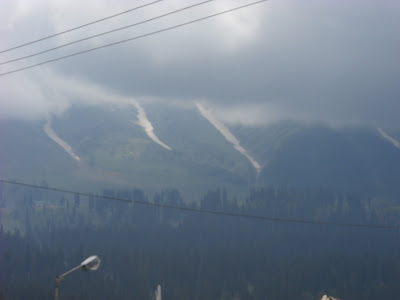 The photographs of Srinagar and Gulmarg were enough to leave me crying over the missed opportunity to visit the places, but there was more. Just when I thought that nature has been a trifle unfair in bestowing its best to Srinagar and Gulmarg, came the mention of Pahalgam.Whole of Pahalgam is a big recreational resort, and to quote a line from my hubby who got inspired by the beauty first hand – ‘It is better than any fairy land of the kind I had imagined on reading little fairy tales’. 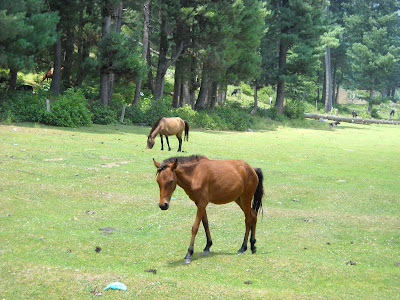 Plants appear to be in love with the place too. These blooming beauties stand testimony to the kind of place Pahalgam is for plant lovers. 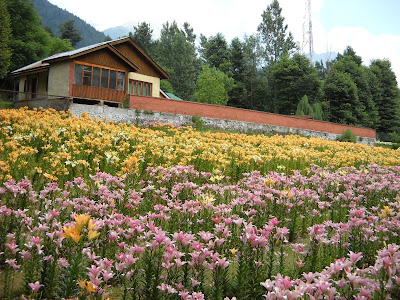 . Drive from Sringar to Pahalgam takes 2-3 hours, and midway through the drive the sparkling clear waters of this river accompany you well inside Pahalgam. The journey is fascinating with absolutely no music required as the sound of flowing river water is a melody no man made music can match. 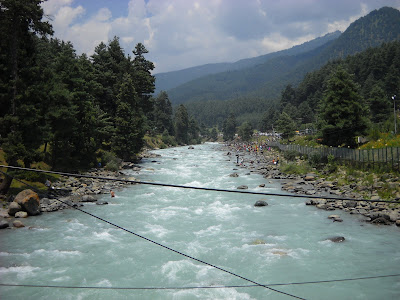 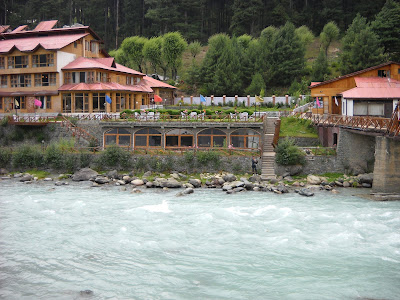 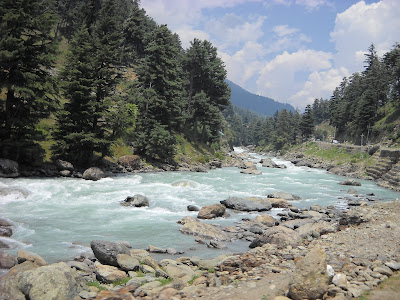 Chinar trees were in plenty there. 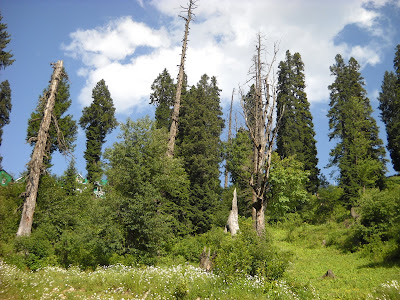 The beautiful Lake, the flora, the weather, the huge Himalayan ranges, friendly people, sprawling gardens, freely flowing jhelum river…Srinagar has it all; yet the paradise has been made inaccessible to the common people on account of terrorism. 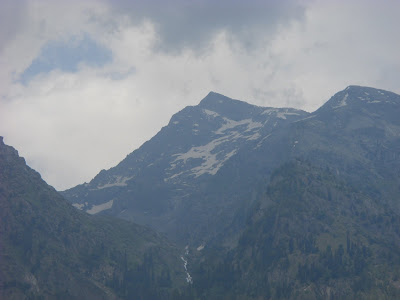 P.S – Kashmir is a hot bed of dispute between the neighboring countries of India and Pakistan. It is definitely not my point or authority to decide or comment on the respective claims, but one thing is certain that to be deprived of a visit to such a place because of the conditions created by self serving politicians is a huge injustice towards humankind.
Posted by Green thumb at 6:25 AM

Wow! Such a beautiful place and what a shame it is not easily accessible. Some place like this is to be treasured and shared not fought over! Thank you and to your husband for sharing.

I was going to say wow too! Magnificent! I'm so sorry you didn't get to go. It's a terrible shame that this is a dangerous region. Thank you for sharing these wonderful pictures.

Your photos make me feel like crying that we are not able to visit this beautiful place. How very sad for everyone ! I wonder whether I would've been brave enough to go there if I had been in your place ... most probably not. And that is the tragedy of it :(

Oh, GT, I can hear the despair in your voice in not getting to visit there this time! I am praying you get to go soon (when safe)...and in all seasons, too!!!

Gorgoeus photos...and your comments were just heart rendering, yet full of hope!

God bless you and your family!

Superb photos of the Paradise on Earth!

At least there are images of this beautiful place to be shared. So glad your hubby came home in good form. Maybe someday all will be at peace.

Thanks for stopping by my blog...your blog is amazing, and I love the way you cover seasons...hope to see more from you...

superb photos. my grand grand parents were from kashmir. like your blog. i want to see more pics of himalayan flowers. i captured some pics of some wild flowers at lake saif-ul-malook and at river neelam but could not post on my blog. keep posting.

That looks like a beautiful place, such a shame that people associate it with violence and turmoil and don't visit. I've heard that Northern Ireland is a beautiful place but you just hear about the troubles and nothing else.

Srinagar is definitely a paradise with beathtakingly beautiful mountains and exquisite flowers. Was the last river flowing from a glacier?..it has that special colour.

Come and visit my pretty butterflies :)

amazing scenery. Glad all went well and was safe.

This post I just have to read over and over again - It is stunning!
Absolutely breathtaking...Thank you

Thank you everyone for leaving their precious comments on this post. Though I myself couldn't go there, but in writing this post and reading the comments, I probably enjoyed much more than my hubby, who visited the place, would have.

Wow, such spectacular sites!! Wish I were there too. I don't know why some of the photos conjured up images of Shah Rukh Khan dancing and prancing around with Kajol!