The other day I was reading an article which said that Plant Weeds are a major contributor in purifying the environment. Well, that sure was news, as till now I have despised the existence of weeds with the contempt reserved for an unwanted, unannounced guest dropping in at dinner time. The rainy season has had a very healthy effect on all my plants, and as usual the weeds turned out to be the best adapted to exploit the favorable conditions (I guess that’s why they are weeds!). Post rains they showed an explosive growth. Earlier I used to mount an all out offensive, but this time, with the above said article in my mind, I treated them with a little respect. Oxalis were, thanks to blogging, found to be decorative plants elsewhere.It seems that plants qualifying as weed differ from place to place. 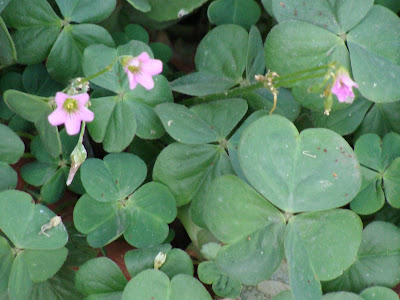 Periwinkle is the most omnipresent among the pack. It grows with so little fuss – in fact it grew without my planting it at all – that it has always been there ever since I remember. Like all other things which need no pampering and become for granted in life, this flower felt like an unwanted presence. With a changed perspective it now looks beautiful to my eyes! 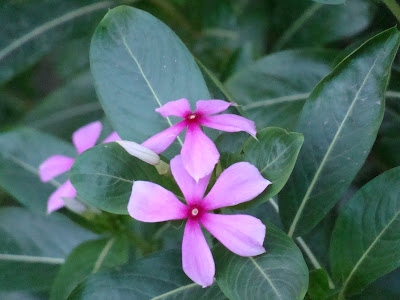 Butterfly weed was sourced from a local nursery. Now that appears paradoxical- why should one buy a weed? Well, I was charmed by its looks…I still am. Its just that it spreads so fast that it gives an unhealthy competition to other plants. 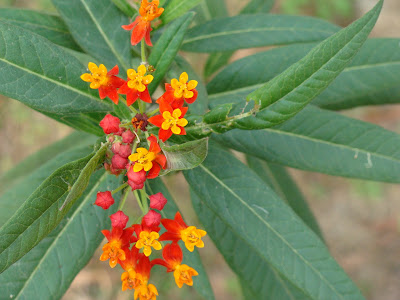 Like Oxalis, Lantana too is ironically a beautiful weed. There are vast stretches of land made beautiful by a covering of prolifically growing Lantanas, but in a home garden there rapid growth can be a menace. 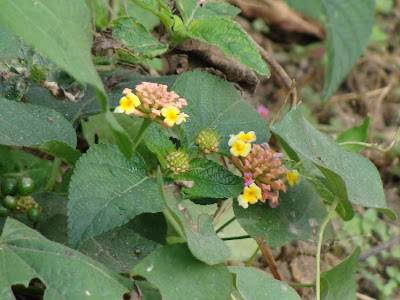 Castor plant is grown as an ornamental in many parts of the world b'coz of its star shaped, multilobed leaves. It has a copper variant too, which looks very interesting in garden landscapes. Here it grows profusely and multiplies rapidly, thus categorised under weeds. Though highly toxic, paradoxically it is also used in many Ayurvedic medicines since ages. 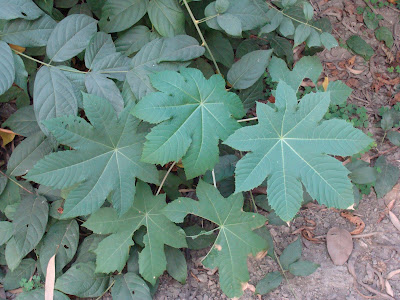 This is something which psyches me out even before touching it! For a gardener the psychedelic properties of Cannabis,or Marijuana, or Bhaang as is known locally, are evident as soon one finds it growing unabated in the garden, unabated and remorselessly. It is especially during spring that I have to struggle hard to keep the plant in abeyance. 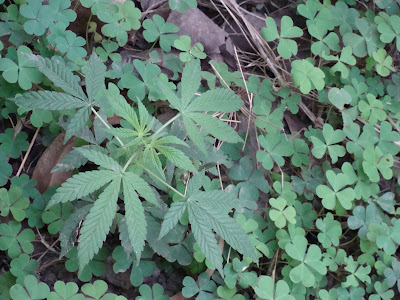 The name of this weed is not known to me but both the leaves and the purple hairy flowers are very interesting.The leaves are initially green but change to yellow later on! 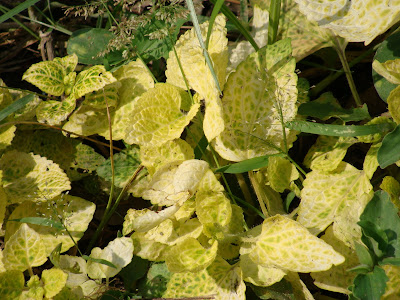 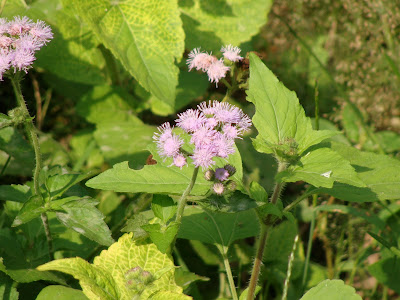 They are beautiful, but their beauty is compromised because they are plenty.
Posted by Green thumb at 1:11 PM

One of my favorite quotes is “weeds are nature’s graffiti” I have several weeds as regulars plants in the garden, but I got to tell you the oxalis weed test my patience’s

Butterfly Weed and Joe Pye Weed are two of my favorite plants!

"One man's meat is another man's poison" Green Thumb, I have never seen a cannabis plant growing and if it were growing in my garden I wouldn't recognize it. I will have to take a closer look now LOL. Some people will envy you that this plant is growing wild in your and you rooting them up and throwing them away LOL. I will have to take a walk around the garden to make sure it is not growing in my garden or else the cops may come calling LOL. I had read somewhere that the type weeds you find growing in your garden will indicate the quality and the fertility of the soil. Some weeds add nutrition to the soil when ploughed back into the soil weeds like clover is one of them. It was a very interesting article ...if I find it I will send you the link if you like.

Periwinkle is a menace in our garden back home. It never stops growing or flowering, and lives off other plants. They sprout right in the middle of our vege garden or some other moist corner. I like that yellow-green leafy plant, looks interesting. Very nice post, Green thumb.

So weeds do have a function other than keeping us gardeners frightfully unamused for vast amounts of time?

Most of your weds are highly prized ornamental plants here and the Bhaang is considered more of a recreational plant. ;-)

I have just about decided to just let the weeds have their say here! LOL! There are many of these in my yard, and I am planning to plant a ton of the periwinkles, as they bloom and grow year round here, ...with anything the weather throws at them!

If there's one strong case in favour of weeds, it has to be that butterflies love them. And keep returning to them.
You have marijuana growing in your garden? I saw it all over the place in Kullu and Manali, by the roadside, up the mountains, everywhere!

Hello Green Thumb! You have a nice collection of beautiful weeds! They are so desirable in many gardens here! I'd love to have a castor oil plant, but scared by its poisonness. I have some nice plants that became weeds in my garden. For example, nasturtiums! They can take over my flower beds!
It's a good idea to look differently at some weeds. Let's take shot weed. They say it can be used instead of mustard. Moreover, if it spreads, it doesn't allow other weeds to grow! Thanks for the very interesting post, I enjoyed it!

Hi, when I read the book 'A Suitable Boy' by Vikram Seth, it was mentioned many times about one of the characters taking 'bhaang'. I didn't have a clue what was that! Now I know it's cannabis/marijuana! Thanks! :p

I used to rip mine off.. i think i should keep em..

What a great post. I love the photos of "bhaang". What a great name for the quintessential weed. :)
I love all your weeds - periwinkle and lantana especially. Can you believe that lantana has the nerve to be finicky in my garden?
Nice to be back reading you all.
sharon

Hello Fellow Blogger,
I'm a fellow Indian growing diffferent plants in my garden too..
I've recently came across different types of weeds in my garden as well..
Could you by chance help me out in identifying them?
I saw one of those in your pictures as well..
What is the heart shaped weed called ,i can see it in the cannibis sativa picture that you have clicked!

The cities close embraces a chic class in their set back culture, these regions looms around a mysterious manner, by living a self self-satisfied life wholly unknown to the fashionable world's. If you want to know more then please visit our Cannabis Stores in Ellensburg website.

Celebrity net worth is a website which reports estimates of the total assets and financial activities of celebrities. Read it for more information.

Canvas Tarpaulin is ideal for protecting construction equipment, stationary goods, and outdoor clothes. These are composed entirely of cotton fabrics, making them both sturdy and environmentally friendly. These covers come in a variety of colours, sizes, and thicknesses, making them suitable for a multitude of uses. Metal grommets are on all four sides, and the tarps are spaced at a metre interval. These tarps can provide a one-of-a-kind solution for a wide range of critical functions.