My Whacky and Whimsical Containers

When I did this I was accused of being downright eccentric and whimsical by my family, but now these ‘best out of waste’ ideas look like work of art, at least to me.It was, thanks to some careless handling on a bad mood day that the base of my favorite water flask came off. The sight of the fresh Kiwi fruit on the body had made this flask a much cherished one. So obviously my despair knew no bounds when the base gave away. Not in a mood to throw away something so dear to me, I hit upon the idea of planting some ornamental Asparagus in it. And now the plant is thriving and the flask with the kiwi fruit photo too is all there. 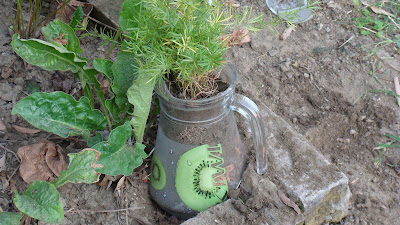 What used to be a beautiful lamp once was reduced to a rotund glass structure after meeting its nemesis in my little daughter. One fine day she decided to test the resilience of the lamp by banging the telephone receiver on it; as it turned out, receiver won the mini battle and the lamp was left separated from its neck. And so here it is, sitting pretty in my garden, with a portulaca in it instead of a bulb. 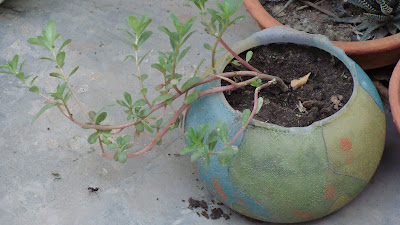 This sea shell was brought from Kerala coast, where my hubby had gone on an official trip, and I instantly knew the best use I could put this shell to. So that’s Haworthia in a Sea Shell for you 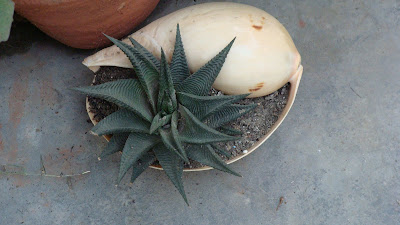 This one actually is an earthenware pot, which was a ubiquitous presence in Indian households for storing water, before plastics and other synthetic derivatives displaced everything traditional and healthy. Because of the naturally present micro pores in the earthenware pot, it kept water very cool and lend a slight ‘taste’ to the stored water making the water feel very fresh to the palate. As a fond remembrance for the, now vestigial, earthenware pot, I planted a Tradescantia in it, and as the structural material of this pot is same as the conventionally used one, plant is happily thriving. 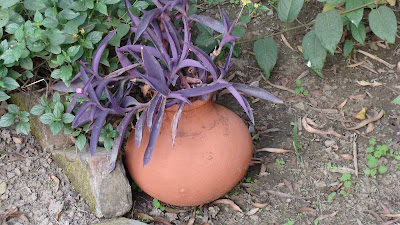 Having read a number of articles about the dangers posed by plastics, I have come to despise them, especially for microwave cooking. I believe that warmth can cause the toxic chemicals from the plastic vessel to enter into food, even with the so called ‘food grade’ plastics. Saying no to plastic for cooking, I used it in my garden! The Portulaca seems to enjoy its modified container. 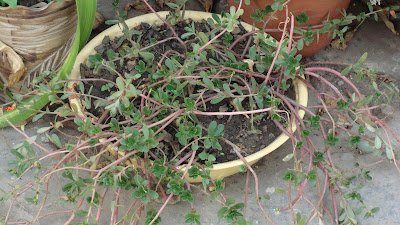 Aromatic tea gave way to beautiful Caladium, as the handle of this cup gave away, and the floral pattern on the cup makes the cup appear at home amidst other plants…or so I hope! 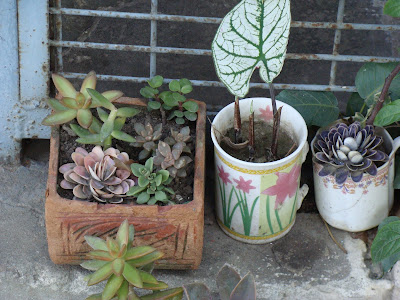 Now that is numero uno in the list of my whacky containers. I had a sedum planted in this loofah and had it hang through a support. 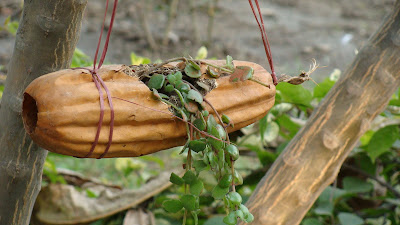 Having seen me indulge in these whacky, and may be downright atrocious container planting, my hubby says, “I am scared that if I am to stand still for more than 15 min, you might even start entertaining the idea of potting something in me” Now that is so inconsiderate!
Posted by Green thumb at 11:52 AM

I am smiling at the thought of your hubby moving quickly out of your path when gardening:-) I also use coconuts cut in half (I a chain saw). Love your loofah planter.

Very good recycling. Here in the Caribbean the traditional water pots have been used for years in gardens, as well as the "coppers' from the old days of the sugar can industry. I like the shell idea-I could try that one as we have conch shells here.

Love Them! I will put flowers in anything. My son never throws anything away without asking me if I want to put flowers in it :-)
Your header picture is beautiful.

I like your Shell container and the loofa container. I wonder how you made holes in the teacups for the water to drain.

I think I will, over the next few days, take a few pics of containers here... I love unusual containers, and it makes life interesting when you start looking at things in a different way...


The loofah is amazing, BTW

I think it adds a lot of fun and color and LOVE to the garden! I notice you used things that you really enjoyed/loved in their earlier lives, so that could definately be the same criteria for your husband, if you plant something in him at a later date!!! Ha ha ha! (Just kidding)!!! ;0
xoxo- Julie

Love the Haworthia in the sea shell GT. And who could have thought of this innovative use of a loofah !

I can understand your attachment towards loved objects. Interesting containers. The seashell is a wonderful idea but the loofah, wow...amazing!!

I love your container ideas, creative and environmentally friendly to reuse old objects.

How wonderfully creative! I love them!

My favorite is the lamp. I'm sure it was a lovely lamp and now it's a lovely pot as well! Excellent idea for reuse.

loved this post... i too regularly use broken ceramics cups and bowls.... on another note, i need your help in finding a remedy for the aphid attack on my portulaca. also i noticed tiny catterpillars devouring my caladium in full gusto... please help!!

What a clever way to recycle! You have so many to water! I feel that way about plastics too. Thanks for the laugh ... any husband would make a unique container. Carol

islandgal- Thanks dear Helen, Coconut shell must look cute as a planter. I am going to borrow your idea and have something planted in a coconut shell.

Nicole- There is a lot we can learn from traditional practices; most of them were so environment friendly. Earthen pots can not be bettered for growing plants. Sometimes I wish plants could speak for themselves.

Hocking Hills Gardener- You have a cute son. Wish my hubby could learn a thing or two from him; he won’t lose the chance to make a pun at my containers.

lotus leaf- thank you. Well, glad you asked. I haven’t made any holes in the cup, instead I spread a thick layer of gravel at the bottom of the cup, and caladium, thankfully, is water loving.

Claude – These small idiosyncratic experiments do make life interesting, and add to it the comments by blogger friends like you…it feels wonderful.

Julie- LOL! Quite right Julie, if I borrow Carol’s comment, I guess after several years of marriage these guys act so bored that they will look more interesting as a container.

Sujata- That was the first use I thought that sea shell could be put to; it just compliments the Haworthia so well; like starfish in a sea shell…

Kanak- It is like all these objects have reincarnated as containers, much in line with Hindu philosophy of rebirth!

WizzyTheStick- Thanks for the lovely words.

Matron- I did all this as a quirk, but the appreciation is making me pink

Sweet bay- It was my favorite too – when it was a lamp, but now it is a cute container, reminding my little one of her naughty little misact.

Random Thoughts- Welcome to India garden, Arundati . Thanks for the appreciation. As for your query , I think Neem oil is the best solution to deter all these pesky bugs. It will drive away the caterpillars too bcoz of its bitter taste!

Carol- Ha ha ha… you made me roll with laughter and my hubby is still fuming after reading your comment.

Gardening brings us so close to mother nature, and we should try to reuse/recycle whatever we can.

Portulaca use to be called 11'o clock plant because it's open by 11 in the morning.:)

Now that was unsympathetic of hubby! I'm sure he could've at least held up a pot or two. God didn't make them physically stronger for nothing, right? ;D
Loved your loof planter. That shell planter actually does look like something out of a garden magazine! Waiting to see what you'll try next.

Very cool! Love this post! Wobderful!You've got great spirit and creativity in the garden!

Hi... Looking ways to market your blog? try this: http://bit.ly/instantvisitors

Fantastic wacky containers - love them! In the 2nd photo from the bottom, are those seashells in the pots (pink and black)? The loofah looks great! Fabulous - lots of character!!!

Good for you to use your creative talents to 'repurpose' those items. I think they give your garden a truly personal touch.

hi, i've tried neem oil, but guess what, even the weakest solution, 1 capful oil to a litre of water, leaves the stem and leaf burnt... i checked online and they said to spray loads of water to get rid of the wax that helps the aphids hang on to the plants.... am afraid that isnt working... they're now steadily spreading... sigh!!

I like your Shell container and the loofa container. I wonder how you made holes in the teacups for the water to drain.
Thanks for sharing..
Work From Home India

Bingo! u r so like me.. anythng that has a base and a slight edge becomes a planter for me.. every container is a future seed pan or planter.. gosh we r addicts!! hehe

your garden is so lovely and I love how creative you are with things to use as planters. the house we live in now had something planted in an old kettle. you are an inspiration! :)

I am in love with your blog! I wish I could walk through your garden...! I am also quite thrilled to have located someone from India who is as experienced and knowledgeable as you appear to be, and I was hoping that you could help me with something. I am trying to plant indoor plants in containers without drainage holes. From what I understand if I fill the bottom of my container with pebbles or broken pieces of clay, it will help soak the extra moisture. Have you tried something like this...? I will appreciate any advice you may have for me!

Very creative! Like the lovely pots!!!! They add to the whole look of the garden as well I have only plastic pots in my balcony! Will try out some whacky things like these too!