Life moves at a very interesting pace when things happen in the garden. I have planted the seeds which i had stored in last season. The beds are ready. 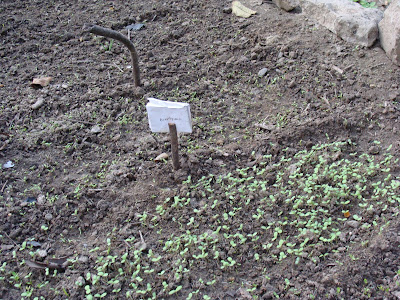 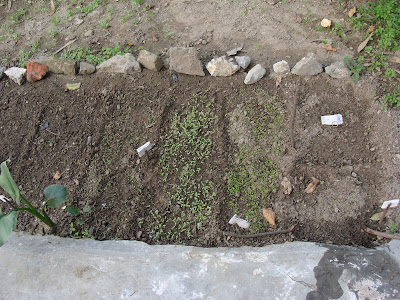 Today we had the first fog of the season, quite prematurely in fact; fog is not to be expected before mid December here. 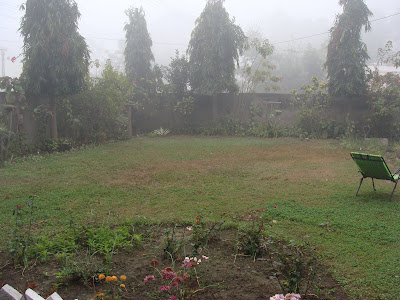 Spinach is growing in plenty and that must be the situation everywhere in this area because a lot of my neighbours have asked me if i can use some Saag - a pureed spinach preparation, commonly eaten in North India. 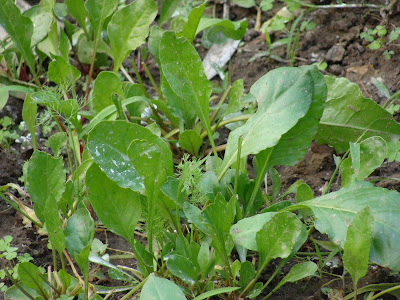 After a long time I had the luxury of visiting local nursery yesterday. The nursery owner had - to my utter surprise - brought in some Tulip bulbs, along with Irises and Hyacinths. I had been dying to grow Tulips here. All the lovely blogs, even some of the Indian ones, feature their gorgeous Tulips. I do not know if they will grow in my climatic conditions but i will have the satisfaction of having given them a try. 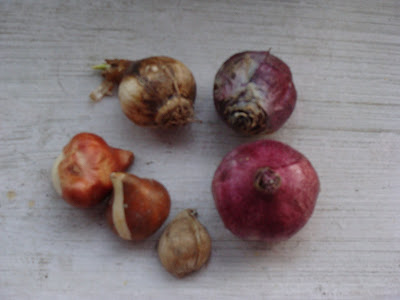 Besides the exotic ones i also got some Marigolds. I plan to plant them between the Mums, so that when, by spring it is time for Mums to wither, the Marigolds would be in bloom. 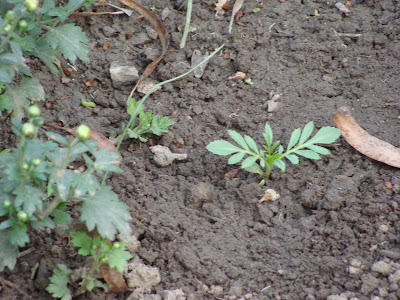 And then there was this little birdie tip toeing her way around the garden; I haven’t seen it before but was completely enamored by its furtive walk. The bird was obviously happier on the ground as it made no attempts to fly despite my presence there. The pleasant outdoors in North Indian winters are capped by these unexpected bonuses. 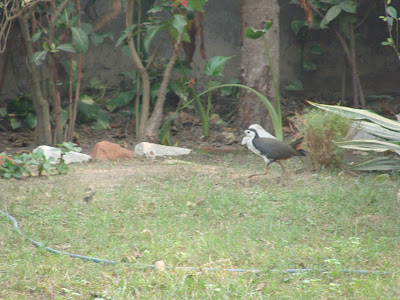 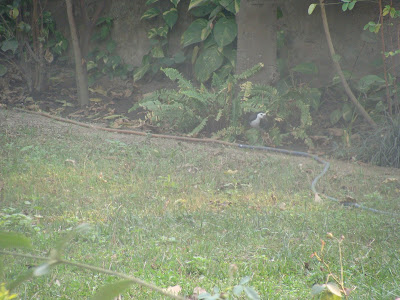 Things are picking up slowly. Winters have begun and till now the temperatures are cool and comfortable. The days ahead will see the mercury plummeting further and one will need all the will power to get up and get going....but the prospect seems inviting to me:-)
Posted by Green thumb at 4:11 AM

Good luck with your tulips. I have read that the secret to growing tulips is you must plant them in an open spot where they will get some neglect. They thrive in harsh conditions (central Asia) and most people make the mistake of putting them in the perennial bed where they get too much water, fertilizer, and attention.

Here people put tulip bulbs in the fridge for a few weeks over winter before planting them, as it doesn't get cold enough for them outside.

Your garden is looking cool and fresh. Hope all your bulbs come up lovely-my clime is way too hot and dry for tulips.

Nancy Yos - welcome to my blog, dear Nancy. Thanks for enlightening me on growing Tulips.'Neglect' is something I shower most of my plants with; Tulips won't be allowed to be an exception:-)

Vireya - Thanks Vireya, that sounds logical. I will keep some bulbs aside to give this idea a try.

Tiragreene - Thanks Tira, even here I am not very optimistic about the Tulips, but wanted to give it a try.

Oh, my...isn't it wonderful that you are so open to the colder air that will be coming your way? It has been chilly here, and we are expecting another cold front tomorrow night down into the 30's! I guess I will be covering a few plants! I do not like the TOO COLD times of year...a nice 70-72 would be great all year long, in my estimation! LOL.

P.S. Good luck with your tulips!!! Will be fun to see what will happen!!! Keep us posted!

welcome winter with enthusiasm , it is pleasure to read your blog.

Love the look of your garden in the fog. Everything looks so promising. Good luck with the tulips! Our nurseries don't have/bring them! But I did get lilium bulbs this year.

Your visitor is the white-breasted water hen. Is there a water body in your area? There's a marshy plot of land in our locality and we often see these birds. Furtive is the word for them.

Thanks for stopping by my blog yesterday. Happy gardening!

The bird tiptoeing its way is a white breasted waterhen.it is a marsh bird and by the way those birds on the eucalyptus are not eagles they are black kites.if you notice carefully you will find that they have forked tails which is an identifying feature of kites.also good luck with the tulips.

Julie - I would have frozen alive in those temperatures! May you get to the nice 70-72 soon.

Shraddha - Hi Shraddha! Yes dear, I am trying my best to welcome the dreary weather with all the enthusiasm i can amass.

kanak - Thanks for enlightening! I saw this bird for the first time in my locality; i guess the hygiene standards are going down.

Sarban - Thanks Sarban. I was also rather confused between Eagles and Kites, but thanks to the knowledgeable you, the confusion is now resolved.
P.S - It is flattering to have someone visit/remember an old post.

This was my hobby in my school/college days, when we had a huge backyard. Every vacation, I would prepare the beds, plant the seeds and wait for the results. But some point of time, academics took over and after a first crop, it got difficult to maintain them. But back I was the next vacation, all over... I wish I could do it again. But I live in an apartment now!

Your garden soil looks so rich. Have you been amending it for a long time, or is it alluvial? I agree that the colder temps are welcome this time of year. We live in northern Florida, and the summers here can be brutal. This year, though, the extreme cold has started much earlier, and the higher heating costs over the extended season will not be so welcome. I'm looking forward to reading your other blog once you begin posting on it.

The bird is 'White-Breasted Waterhen' You can read about it here in my blog post:
http://natscimedwonders.blogspot.com/2008/03/water-bird-and-its-brood.html

Thank you for visiting Our Little Corner Of Paradise this year, dear Green Thumb :)

Just popped by during the run up to Christmas to wish you all the best, and happy gardening in 2011…WG :)

What on your paper?

"You will never be happy if you continue to search for what happiness consists of. You will never live if you are looking for the meaning of life" - Albert Camus

You can get more quotes about happiness at http://www.quotelandia.com/category/Happiness

I love seeing your 'nibblers'. Put on the layers and keep warm.

Did you know you can create short links with AdFly and get money from every visitor to your short urls.

Nice blog thanks for sharing Choosing the right place to buy your first plant isn’t that hard of a choice anymore. Presenting the best plant nursery in Chennai - Karuna Nursery Gardens is proud to showcase more than 3000+ plants ready to be chosen from.
plant nursery in chennai
rental plants in chennai
corporate gardening service in chennai

Excellent blog thanks for sharing Run your salon business successfully by tying up with the best beauty shop in Chennai - The Pixies Beauty Shop. With tons of prestigious brands to choose from, and amazing offers we’ll have you amazed.

This is the first & best article to make me satisfied by presenting good content. I feel so happy and delighted. Thank you so much for this article.

Very useful blog thanks for sharing IndPac India the German technology Packaging and sealing machines in India is the leading manufacturer and exporter of Packing Machines in India.


You write this post very carefully I think, which is easily understandable to me. Not only this, but another post is also good. As a newbie, this info is really helpful for me. Thanks to you.
Tally ERP 9 Training
tally classes
Tally Training institute in Chennai
Tally course in Chennai

A good blog. Thanks for sharing the information....Sarkari Job for latest jobs released for all type of career options. A great number of population aim for Banking and SSC jobs, where there are numerous opportunities in terms of posts as well as vacancies...

This is the first & best article to make me satisfied by presenting good content. I feel so happy and delighted. Thank you so much for this article.

Excellent blog thanks for sharing the valuable information..it becomes easy to read and easily understand the information.
Useful article which was very helpful. also interesting and contains good information.
to know about python training course , use the below link.

Hey, great blog, but I don’t understand how to add your site in my rss reader. Can you Help me please
Best Institutes For Digital Marketing in Hyderabad

Nice. I am really impressed with your writing talents and also with the layout on your weblog. Appreciate, Is this a paid subject matter or did you customize it yourself? Either way keep up the nice quality writing, it is rare to peer a nice weblog like this one nowadays. Thank you, check also event management and sample thank you letter after a successful event

This Was An Amazing ! I Haven't Seen This Type of Blog Ever ! Thankyou For Sharing. Primavera Training in Chennai | Primavera online course

Thanks for posting the best information and the blog is very helpful.digital marketing institute in hyderabad

Thanks for posting the best information and the blog is very helpful.digital marketing institute in hyderabad

Here is the list of best equipment for YouTube that is very cheap and works effectively in Video making.

I truly appreciate just perusing the entirety of your weblogs. Just needed to educate you that you have individuals like me who value your work. Unquestionably an extraordinary post. Caps off to you! The data that you have given is exceptionally useful.data science training in chennai

Canvas Tarpaulins are ideal for protecting construction equipment, stationary goods, and outdoor clothes. These are composed entirely of cotton fabrics, making them both sturdy and environmentally friendly. These covers come in a variety of colours, sizes, and thicknesses, making them suitable for a multitude of uses. Metal grommets are on all four sides, and the tarps are spaced at a metre interval. These tarps can provide a one-of-a-kind solution for a wide range of critical functions.

I was very pleased to find this site.I wanted to thank you for this great read!! I definitely enjoying every little bit of it and I have you bookmarked to check out new stuff you post. data science course in surat

Extremely overall quite fascinating post. I was searching for this sort of data and delighted in perusing this one. Continue posting. A debt of gratitude is in order for sharing.data scientist course in warangal

Amazingly by and large very interesting post. I was looking for such an information and thoroughly enjoyed examining this one. Keep posting. An obligation of appreciation is all together for sharing.data science course in gwalior