I guess that the trip has been so exciting for me that I can’t help but share more of it. There is something with these vacations that lingers on pleasantly in the memories long after the actual thing is over. I still am beseeched by the medieval charm of the palaces, scenically complimented by the ‘Birla Mandir’ made of pure white marble. The famous Taj Mahal in India was also made from marble specially imported from Jaipur! Although I am not a very religious person but definitely a spiritual one, the calm and peaceful environment around the temple, somehow invoked a feeling of respect and reverence to God. 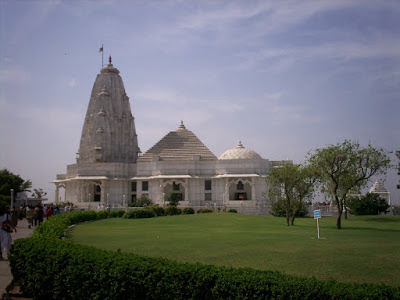 Situated adjacent to the temple was this pure marble construction of god Shiva’s idol. Surrounded by marble pillars, the God has an arm raised for blessing (a common feature in most Hindu idols). 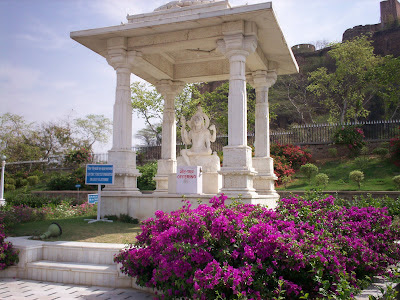 With the calm and serenity still pervading we made our way up towards the Amber fort. En-route we came across another temple, significant because the Rajas of Jaipur used to pay their obeisance here before setting out for war. 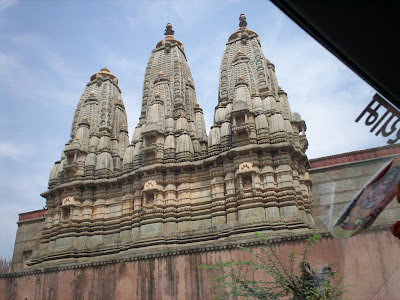 By now Sun was almost relentless with its heat, undaunted we hired a guide to guide us through the complex yet beautiful intricacies of the palace architecture. Now we have to give something to the genius of the architects of that era, the structure here is the sheesh-mahal, loosely translated it means a palace of reflecting glass. Designed as a winter bedroom for the royal females, its indo-Persian architecture of reflecting silver ensured that the oil lamps fixed on either side of the room get uniformly reflected, lighting the room, besides keeping it cozily warm. 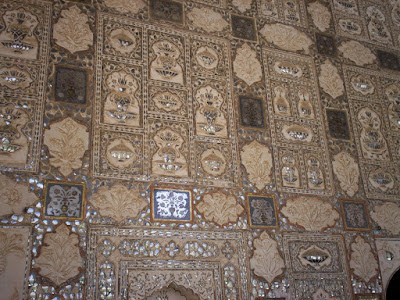 That’s the roof of the sheesh-mahal, opulent! 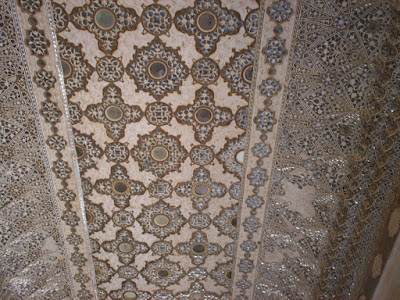 The structure here was the summer bedroom! We were told that the royal rooms, inside the structure, had a storage space for rain water on their roofs, keeping the rooms cool. These people certainly had an idea of rain water harvesting! Concepts believed to be so recent and in vogue, ante date almost a century 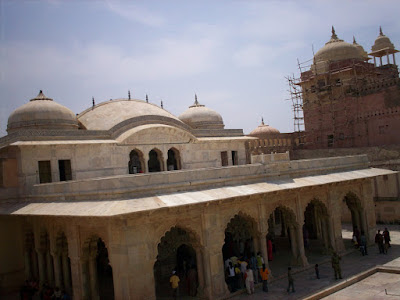 Finally, we were taken to the museum, again a glorious edifice of indo-sarcenic architecture and housing remarkable remnants of an interesting era. The museum has been modelled on Victoria and Albert museum in London. 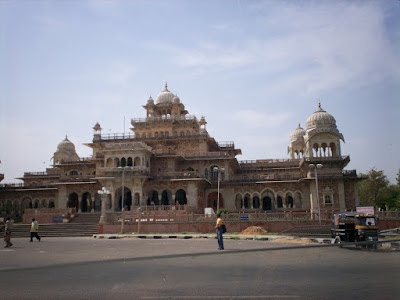 Now with the trip over and having compulsively shared my excitement with you I am back to the routine, but it is no longer drab and monotonous.
Posted by Green thumb at 10:11 AM

I really enjoyed reading your articles and would like to put a reference to your work in an article that I am writing on the therapeutic effects of gardening. For the article I would like to know your name and city...

I am writing this for Woman's era.

If you think it is possible for you to give me ths information, please give me your email id so that I can contact you directly

Well Shruti, Thanks for the nice words. My email id is pgoel_76@rediffmail.com
If there is anything more you wanna know please contact me on my e-mail.

I have just spent a delightful time reading about your trip and staring in amazement at the great beauty of the palaces and the museum. I love the sheesh-mahal ... the ceiling is truly stunning. I love the patterns.

The white marble statue is beautiful - the setting is lovely and there are purple flowers (which I love).

It sounds as if your trip was a much-needed respite and an opportunity to replenish your energy. That is such an important thing to do.

I hope you'll share more about your trip too. Your photographs are great and so is your writing. You make me feel as if I was accompanying you!

Thank you for taking me on this wonderful trip with you. I love architecture (studied it) so this was a real treat. The sheer beauty of these buildings leaves one speechless, don't they.

And you are right, even when one is not religious one can still feel the reverence that was put into building these beautiful temples as a tribute to the gods.

Thanks for taking me with you on this beautiful tour! All the palasts and building made of marble are so wonderful. And as you wrote they thought about important things like rain harvesting and keeping the rooms warm. I think we could learn something from them for our future!
Nice greetings, Verena

Magnificent temples, which are testimony to the love and faith of the builders.

Hello, thank you for visiting my blog. Of course, I was curious of my new visitor and had to take a peek of your blog as well. Your beautiful descriptions of your garden, journeys and your blossoming gardener are fun to read and educating as well. I am sure I will return often. Greetings from Germany, Andrea

Thanks so much for sharing your vacation with us. I can only imagine how exciting it must be to see the temples. Wonderful photos.