The much needed break

My sincerest apologies for taking so long to write this post but finally after a long gap I was able to treat myself to a vacation, although a short one, to the pink city Jaipur. A stark contrast to my first love that is gardening and green, Jaipur is situated in the desert state of Rajasthan but Jaipur as an exception had some flora I hadn't come across before. Magnificent and opulent, the city of Jaipur was a feast to the eyes. I could not help but wonder at the kind of lavish lives led by the erstwhile rajas and maharajas. Huge palaces on the top of hills presented an awe inspiring view despite the blazing sun (It was 37 degree Celsius!). 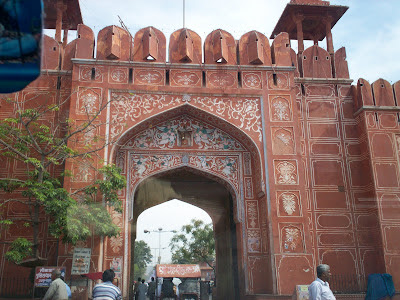 Entering Jaipur city, I was greeted with the sight of the huge yet beautiful gate, an apt reflection of the architectural megaliths, on its other side, awaiting my visual senses. 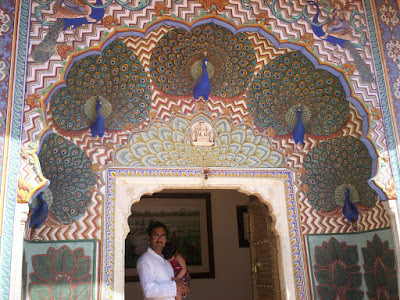 My trip started at the so called ‘City Palace’ the abode of descendants of the Raja of Jaipur. The Peacock Gate took my breath away (can only dream of one at my entrance!). 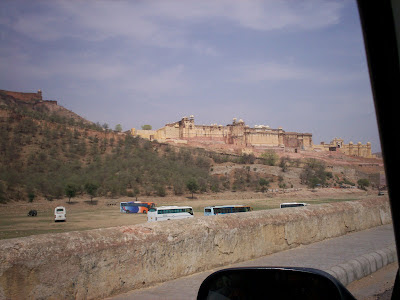 A 15 Km drive away from the hustle and bustle of Jaipur took us to ‘Amber Palace’ perched atop the Aravali mountains and a standing proof of the architectural abilities of people of those times. 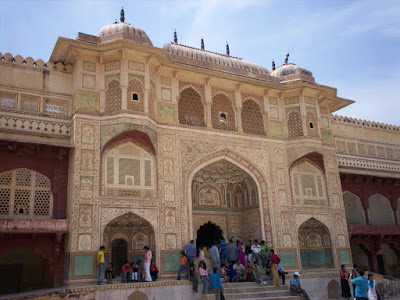 That’s the gate of Amber Palace, splendor in abundance intricately decorated with vegetable dyes! (Imagine the eco-sensitivity of those times) 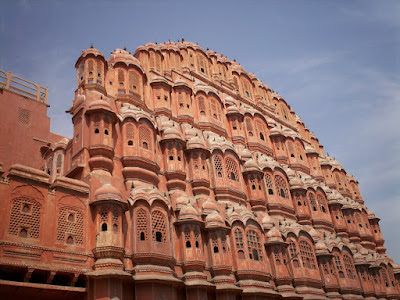 That’s the famous Hawa-Mahal, a façade, constructed for the royal females to watch the various processions passing by the city, without being seen themselves. I feel, despite the lavish and luxury, women got a raw deal in those times. To be pushed behind a façade for avoiding exposure to males is so demeaning.
Posted by Green thumb at 2:35 AM

Thanks for your very interesting post, I esp like the photo of the Hawa-Mahal. Yep, wont like to have been woman there and then! Was there any interesting shopping there, like for textiles and jewelry?

I would love to see the Peacock Gate ... it is so beautiful! It is hard to imagine the amount of vegetable dyes that went into the Amber Palace's gate. What amazing architecture and how lucky you are to have seen such an incredible place.

I'm glad you had a holiday - and that we live in better times for women. even if the Hawa-Mahal façade is beautiful.

Thank you for your lovely blog comment - it is much appreciated!

This is awesome! What incredible beauty! Thank you for posting these pictures...some of us would never see such sites, otherwise.

I, too, am glad that times are improved for women.

Glad you got some time away! We all need breaks!

Wow...for a European girl like me it´s a totally different world! Different builings, different culture, different architecture! But it´s really amazing!
I would love to see it one day, the only thing is that I really would have problems with 37° :-)!

Thanks for your great tour, I really enjoyed it very much!
Greetings, Verena

Thanks for the trip I liked it a lot. That peacock Gate is breath taking, the palace as well !

Hope you had a lovely time and welcome back!

Thank you so much for sharing the photos. Beautiful. I have family members that have visited India. And they fell in love with the people and places and the strong spicy fragrances.

I really enjoyed sharing the trip through your excellent pictures - the Peacock Gate is a site to behold. I wonder if we could mosaic a lone peacock. May I snag your picture for my album?

Welcome back - I bet there are lots of exciting things burgeoning in your garden.

Yes Dear Nicole, Jaipur is rather famous for its gold jewellery and marble replicas.
Really Kate its remarkable that people then had such sensitivity to ecology so as to use vegetable dyes.
Thanks for appreciating the pics, Gotta garden. Till you visit India, I'll try to make sure that I blog more such pics for you.
Thanks for visiting verena. I hold a similar awe for European culture- clean ,disciplined and so well organised. 37deg is surely a problem even for me but december and jan are pleasant.
Thanks Dear Yolanda, it is always such a pleasure to hear from you.
Thanks for the visit, Kisses from Heaven. Strong spices fragrances! well, I wonder where they all went to but yes india is quite famous for spices.
Thanks dear Ladyluz, the pics are all yours and feel free to use them anyway, in fact its a compliment for me that you liked them so much and yes there is a lot blooming in my garden, wait for coming posts!!!

It remind me my wonderfull stay in Jaipur. We have enjoyed this city so much ! Glad to discover you via Nicole's blog. A big smile from Paris and the the french gardeners !

I just discovered your lovely blog, and will be back soon to read more. I visited south India a few years ago, and would love to visit again to see more. Your photos of Jaipur are beautiful! Thanks!

Wow...thank you sooo much for these posts. I myself visited India a few years ago and Jaipur was one place I was lucky enough to discover! I can't wait to go back...thank you for the lovely photos reminding me of a wonderful holiday!