The Making of Mustard

Mustard is a common crop cultivated chiefly for the oil yielded by the seeds. I love it more for the cool yellow of its beautiful flowers. The golden yellow spread across the vast expanse is a heart-warming site so common in fields across north-India. In fact all the stages of mustard, right from its inception as a small plant-flower-pod-back to seed have a charm of their own. This was the first time that I got my garden help to get the seeds out and naturally I was thrilled to be able to use the seeds harvested from my own garden, having passed through all the stages in front of my very own eyes! I had sown mustard in early November last year and by December end they were giving out some lovely yellow flowers. 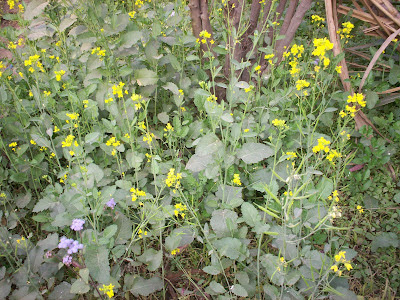 Late February saw the flowers being converted to seedpods. I am tempted to draw an analogy with the life cycle of a butterfly where the Pupa, like the seedpod here, encloses the beautiful creature within. Although, the final result there is more visually appealing than the mustard seed, which is way more visually gratifying in its earlier incarnation as a flower. 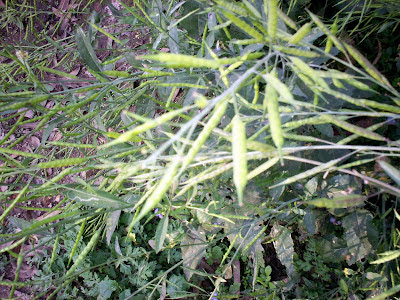 Shortly thereafter, I harvested my proud produce and left it to dry (The sizzling summer sun was very helpful!) 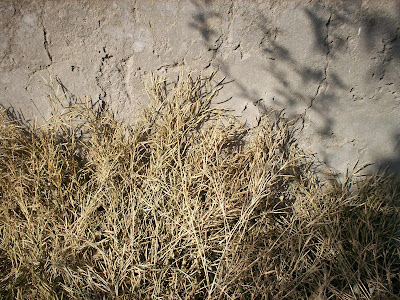 There then, I had my garden help do the skilled bit of separating the seeds skillfully. He thrashed and pounded the dried seedpods and then sieved the seeds to separate them from the husk. 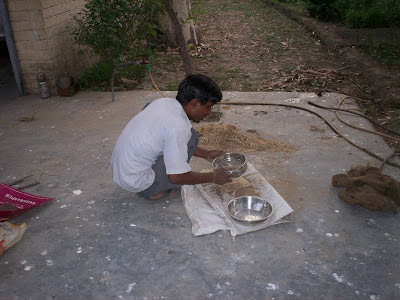 After the tedious and time consuming job of dehusking is over, here is the end result. But some processing in the form of cleaning, washing and drying in the sun is still left. 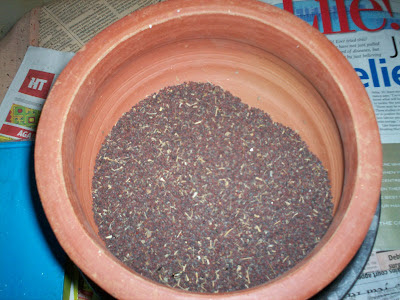 Finally, the seeds are ready to be used in some delectable Indian cuisines, very spicy but all the same, very tasty as well. Though mustard seeds are used in various types of Indian food, they find a very special place in south Indian cuisine, where they are used for tempering the curries. 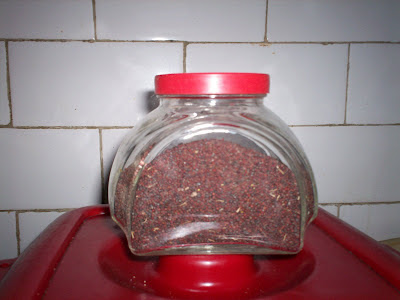 Wow, this brings me back to childhood-where a couple times my mother grew mustard seeds!
I do grow mustard greens-(Indian and Japanese) continuously, to use the young leaves in salads and the mature leaves as "spinach" sautéed with garlic and chilis in olive oil. When I was a child the trio of dal, rice and sauteed greens of different kinds, (the finished dish was called called baghi), was a popular basic meal.
Ive posted some gardens in Trinidad so you might find it interesting to compare to those in India.

Wow, home-grown mustard! That's rare indeed! Wonderful to look at the pictures which show the processing of mustard! Thank you for a great post!

I cook with mustard seeds too sometimes. I like trying out food from all over the world and that includes Indian dishes. ;-) Thanks for posting, it was an interesting read!

How satisfying to be able to use your very own mustard seed for cooking. I have to travel to Gibraltar to buy mine. I love them in a fish curry made with coconut milk and turmeric.

That is so cool that you can make your own spices!! I see fields of mustard plants growing here ... I love the flowers. I had no idea of the work involved in preparing the mustard.

Interesting post. I'd never seen what mustard plants look like. I love mustard and it was really interesting to read this.

Hello, there is always a learning moment visiting your site. It was an interesting lesson I must say. There is quite a bit of work involved to get this seasoning. I love Indian cuisine, by the way. Reminds me that I have not had any in a while. :-) Have a nice weekend. Andrea

What a lovely post and so interesting to see the mustard seeds from start to finish. I love your analogy to the butterfly. I can't seem to find mustard seeds in France and I do so need them for my home-made curries

I very much enjoyed reading about your mustard plants from seed to your curries-great! Your previous post about the different trees in your garden was also amazing, and exotic to me.

Great information! Thank you for putting so much time into your blog!

I love mustard! Nice to see the evolution of that jar of seed!

Feels so great to use things from your own garden, doesnt it? :)

Hi,
I just found your blog while doing some research for mustard seeds. I just loved the idea of growing your own spice. Nice blog. I will be visiting regularly.

Hi - I'm a fan of your blog and wanted to reach out via email to ask about syndicating your content but couldn't find contact information for you on the site. Could you drop me a line at lspichkin@
gmail.com? Thanks!

I've never seen mustard growing - I really enjoyed this post because I knew nothing about growing mustard. Can you use the leaves as part of a salad mix - I imagine that they would have the same sharp taste.
Thanks for all the info - I am now on a mustard plant hunt. :)
sharon

I am the kind of hombre who passions to seek bran-new stuff. Presently I am making my personal pv panels. I am doing it all alone without the aid of my men. I am using the internet as the only path to acheive that. I saw a very awesome site which explains how to create pv panels and wind generators. The website explains all the steps needed for solar panel construction.

I'm not really sure about how precise the data given there iz. If some guys over here who had xp with these works can have a look and give your feedback in the page it would be grand and I would really treasure it, cauze I extremely take an interest in solar panel construction.

Thanks for reading this. U people are great.

Wow mustard seeds from own garden. I would love to do it but i have very less space.
Glad to see many people like me who are interested and passionate abt gardfening
To end up this comment i am inviting you to join my blogging marathon on kitchen gardening.

PLease join us to give ur valuable contribution

Amazing and detailed information. I have a mustard plant which I had grown by its seeds. Intially the growth was good but now suddenly its slow down. Is this because of the humid claimate?