Best Out Of Waste

Lately there was a lot of talk about environment conservation on the blogophere with many bloggers giving their thought provoking takes on eco-balancing and environment protection. Coincidentally about that time I had a chance to visit the ‘Rock Garden of Chandigarh’ 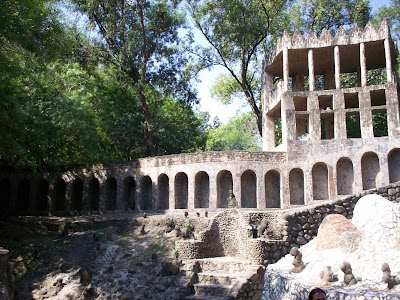 It is a marvel of a common man’s imagination. The garden was conceptualized by an official of a transport office, Mr Nek Chand who wanted some space to pursue his deep passion for sculpting and gardening. He cleared a patch of jungle and started making sculptures with whatever he could lay his hands on, working mainly at night out of the fear of being detected in the day. When finally authorities came to know of the existence, initially they were appalled on the illegality of the creation, but then pragmatism prevailed and judging the artistic quality and potential of the thing, they gave him an official sanction and a grant to carry on with the job. 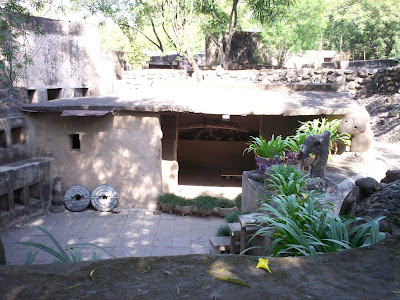 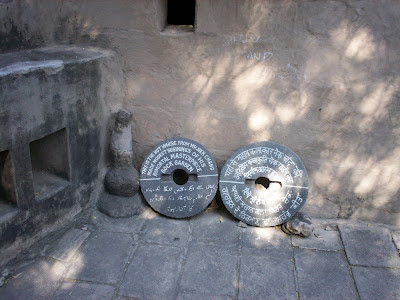 As it stands now, the garden has immortalized the creator and is a major tourist attraction of Chandigarh. 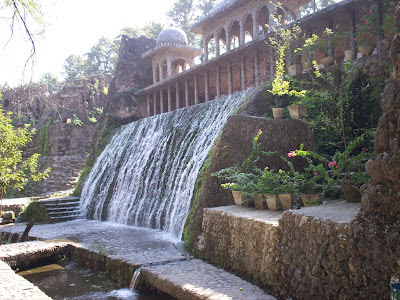 Who would have thought of using condemned telephonic wires or electricity sockets to be made into something as artistic! 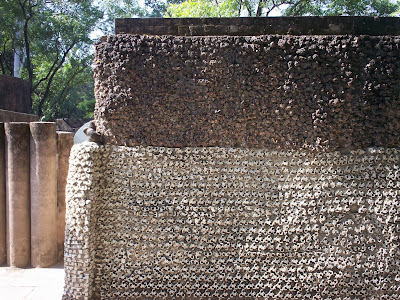 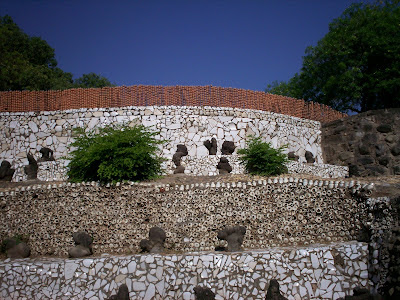 The matted roots looked so real that I had to touch them to confirm that they are actually carved out rocks! 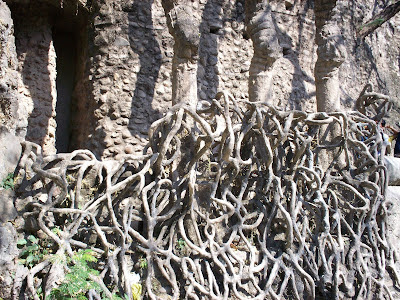 Rows and columns of pots used to create partitions. 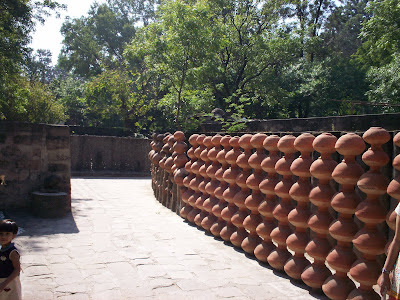 Broken bangles, discarded pieces of broken china, house hold plumbing…almost anything, inanimate and existing, has been used to sculpt these cute figurines. 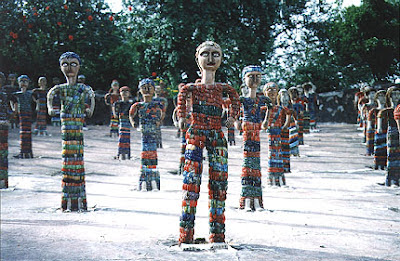 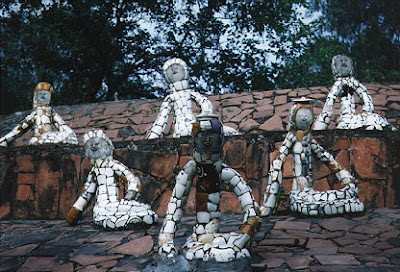 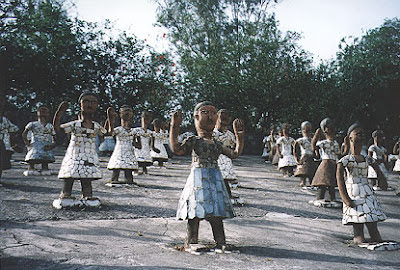 Works like these are an inspiration. It’s not just the beauty that one appreciates; these places stimulate one to be creative, imaginative and loving towards Mother Nature. 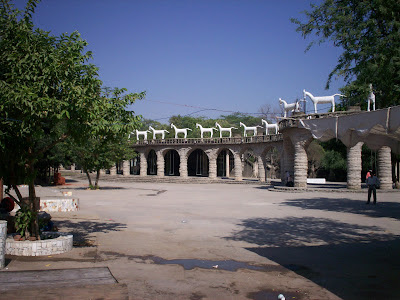 I hope my little one learned a thing or two from the visit. As of now she is infinitely more interested in breaking things than to create any thing worthwhile from broken objects:-) 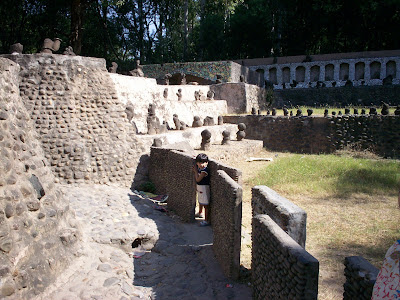 Wow, great post. I never would have known about this place but it looks so fascinating. And what an imagination this guy had. Thanks for sharing!

I'm stunned, absolutely fantastic. It reminds me of Coba in Mexico. I wish I could go to Chandigarh! Were do I find this remarkable place./ lol Tyra

What an absolutely fantastic garden! What great use of waste to turn it into something beautiful. My hat is off to Mr Nek Chand!!!!

Dear Green Thumb, thank you so very much for sharing your visit to this enchanted garden.

Those carved roots are incredible - what an odd and wonderful place, Green Thumb! When you visited did you find out how long Nek Chand worked on the rock garden? It must have been for decades, right?

The imagination of one person can be truly amazing. This garden is a testament to the unlimited power of our imaginations. The rows of pots used to create partitions really caught my eye, as did the endless variety of the sculptures.

If I ever travel to India, I will visit here. And how cute your little girl is ... I caught a few glimpses of her.

What a fascinating garden....full of whimsy and imagination!
Thanks for stopping by my blog.

The ‘Rock Garden of Chandigarh’ looks amazing - what an inspiring magical place - I'm sure your little one will remember it for a long time - those sculptures must look even more fantastic if you're small!

It certainly shows the dedication, inspiration and actic love and talent of someone truly possessed by art and a love of nature. Brilliant.

Lovely post! Still have not got a chance to visit Chandigarh....
But you've stirred up a lot of interest in me to see it now.
Am too fascinated with flowers...do see my world too and lemme know what you think about it.
Swati
http://sugarcraftindia.blogspot.com

hello from the Philippines! Have been reading your blog for some time now because basically we share the same flora---from hedychiums to adelfas etc. Sorry, if i do not know their scientific names :-). This post is definitely terrific to read. Hope my husband and I can visit India one of these years. I consider your country quite enigmatic...and now this unknown Roch Garden Chandigarh! Something for my dream list of places to see :-)!

What aristic expression! I agree, those matted roots are stupendous.

Hello Green Thumb. I just popped by to see what's happening in your neck of the woods, plant-wise, and was blown away by the Chandigarh garden. Such a magical place and a testament to one person's creativity and dedication.

So many interesting things to see in your country. Maybe time to do a picture slide of your travels, as I remember you had a lovely trip north earlier this year.

Wonderful ... and even more amazing that the government had the sense to let him go ahead.

Those roots are so cool!

I'm always in awe of people with that kind of creativity. To be able to live out such big dreams with so few resources. Makes me want weed a little more, dream a bit bigger.

Amazing! I had heard of this garden but your photos are really great to know it better!

As for your little girl... well, to make this kind of art you have to break things first, isn't it true? ;)

I found this post so interesting I've just made a link to it on cores da terra, and then I saw your comment! That plant is a Pyracantha, but I don't know which variety, there are many of it.

Absolutely great and so very different from anything one would see in our part of the world. I see your "little" one is growing. She is very cute. Best regards, Andrea

This art are amazing! I can see your little girl, she look so cute!

Thank you for your nice comment on my blog!

Hi! My name is Project 71. Weird name I know, but my masters are weird too. My masters also say that I'm a really interesting website. So why don't you consider reading what I am. Masters say it won't take you more than 22s to read. :) http://www.project71.com/readme Enjoyy!

This is just to tell you that the link you sent for the Garden Blogger's Carnival is in today's post on the Balcony Garden.
Sue

Missing you Green Thumb! I hope your weekend is going well. I love this post!!

Hi Green Thumb,
thanks for the tour around this impressing garden and thanks for visiting my blog again although it´s been months that I dated it up.
It´s so wonderfull to see photots from summer when it´s grey and wet in Austria!
Have a nice sunday and see you again soon, lots of greetings, Verena

Through "cores da terra" and you, a precious report of a nature lover. Thank you so much: we should be more and more, to help our Planet to survive. Which will be for your little girl and other childen. Bless you!

Hi Green Thumb,
What an amazing post! I think it's so fascinating that these glimpses of genius in people who may be doing something very mundane for a living. It's a real testament to daring to live your dream. Really really lovely.
Your country is so beautiful and you always do it justice with your photos.
Sharon

Heavy Weight Tarpaulins are often used on a daily basis and are a necessary tool for protecting against extreme weather conditions. They have 12mm metal eyelets spaced 50cm apart and reinforced corners on all four edges. These tarps do not cover wear and tear or weather damage since they are composed of a more robust, strong material than other sheets. Are meant to be resilient and provide all-around water protection. These coverings are completely waterproof, recoil resistant, rot-proof, and UV protected, making them excellent for protecting valuables and fragile products from harsh weather and sunlight.